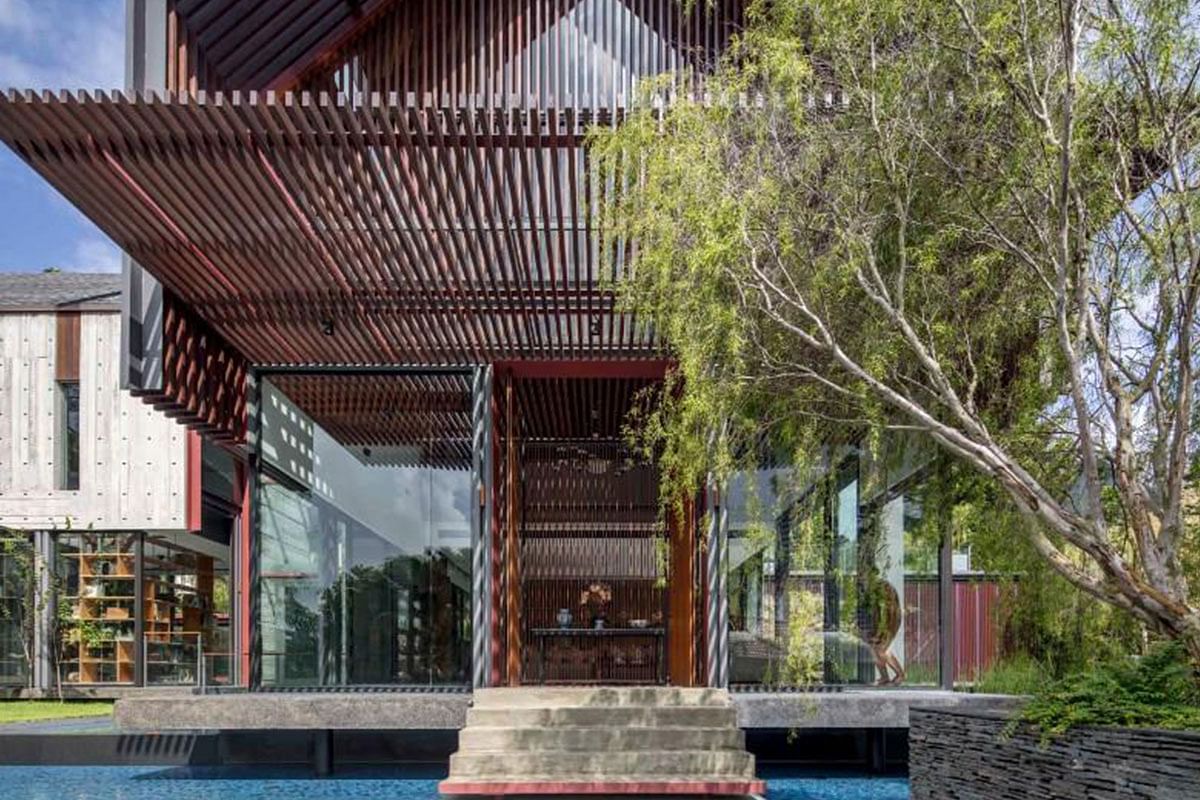 [dropcap size=small]T[/dropcap]he House with Shadows sounds like it could be the title of a book or a film, but it’s actually the entirely appropriate name attached to a new home in a residential enclave off Holland Road. Still, if things go well at the annual gathering of architects known as the World Architecture Festival (WAF) in Berlin later this year, it may end up featured in books and films after all.

The contemporary tropical home, by residential specialist RT + Q Architects, is the only Singapore entry shortlisted in WAF’s House – Completed Buildings category, but the recognition is a fillip for both architects and the home’s owners, low-key doctors who moved in late last year along with their daughter, son-in-law and three young grandchildren.

The house was designed specifically with an extended family in mind and is situated between two other homes owned by the same family. All three houses – different but related – were built simultaneously over a three-year period and occupy a 52,000-square-foot piece of land that originally held two old bungalows before being sub-divided into three plots. The owners chose to live in the middle house because, they reasoned, they could dictate the look of the neighbouring homes.

(RELATED: These four unique bungalows at King Albert Park are in a good class of their own.)

“It was a bit of a master-planning exercise for us – we had to design three GCBs (Good Class Bungalows) on the land,” says project architect Melvin Keng of RT + Q. The environment around the house is further enhanced by extensive landscaping – a luxury in Singapore because of homeowners’ preference for built-up area over open space.

“The house is a marriage of the owner’s requirements and our own ideas – they gave us almost free rein,” points out Keng. “Because of the size of the plot (21,000 square feet), we had the liberty to collaborate with a landscape architect and create a house that revolves around garden spaces.”

Of course, it didn’t hurt that the award-winning landscaper in question – Leonard Ng – is also the owner’s aforementioned son-in-law.

Call it house and gardens: there are three distinct green spaces around the building, including a tranquil Japanese garden fronting the owner’s master bedroom on one side of the house, with one tip of the angled koi pond touching a discreet shaded veranda that extends from the bedroom. Then there is a small “secret garden” in front of the daughter’s wing and mostly hidden from view, and finally a “water” garden, so called because it complements the swimming pool and gym at the rear of the house. “With some projects, we think of architecture first but this is a blend of two important disciplines,” says Keng.

The design concept is relatively straightforward. The house sits atop a spacious garage while the front entrance, reached via a flight of stairs, opens to reveal a voluminous two-storey central space containing living, dining and kitchen areas. Off to one side is the master bedroom suite, an oasis of sorts, and on the other side there is a self-contained two-level wing with three bedrooms. There are additional guestrooms in the central wing, and double-height spaces are a standard feature.

“The house doesn’t look tropical but it addresses the issues associated with living in the tropics,” notes Keng. This includes cross-ventilation, timber sun shades and interior spaces that open up to let the outside in – such as a raised dining deck in the daughter’s wing that extends to the outdoors.

The owners were also sufficiently open-minded to allow the use of non-typical materials and finishes in some areas. There’s extensive use of fair-faced concrete for both exterior and interior walls, kitchen cabinets are finished in natural plywood and an electrical conduit beside a raw metal staircase has been left deliberately exposed.

(RELATED: This Orchard Road property showcases how a house can be built for the tropics.)

The furnishings are best described as eclectic, with Chinese antiques sharing space with mid-century Scandinavian chairs and contemporary sofas. “The house has interesting moments, it’s distinctly different but not incoherent,” adds Keng. “The owners are design-savvy people.”

And what about those shadows? They appear when the morning sun hits outer surfaces and streams through glass onto interior spaces. Light and shadow come into play, to interesting effect, accentuating the dynamic interaction between house and nature.

“After nine months here, we’ve been quite happy,” says the owner, who lived in the East Coast for more than three decades before moving to Sixth Avenue to oversee work on the three new houses. “It’s very peaceful here and we’re surrounded by the sights and sounds of nature all around.”

As evidence, he points to a squirrel nest in a low tree outside the dining area. The nest has an unobstructed view of the pond and Japanese garden. In this neck of the woods, even the local wildlife can be very discerning.