Inside the fascinating Billingsgate Market, where top London restaurants get their fish

The Peak navigates chaos and bawdy patois of London’s Tsukiji for an inside look at the purveyors of some of the world’s finest fish. 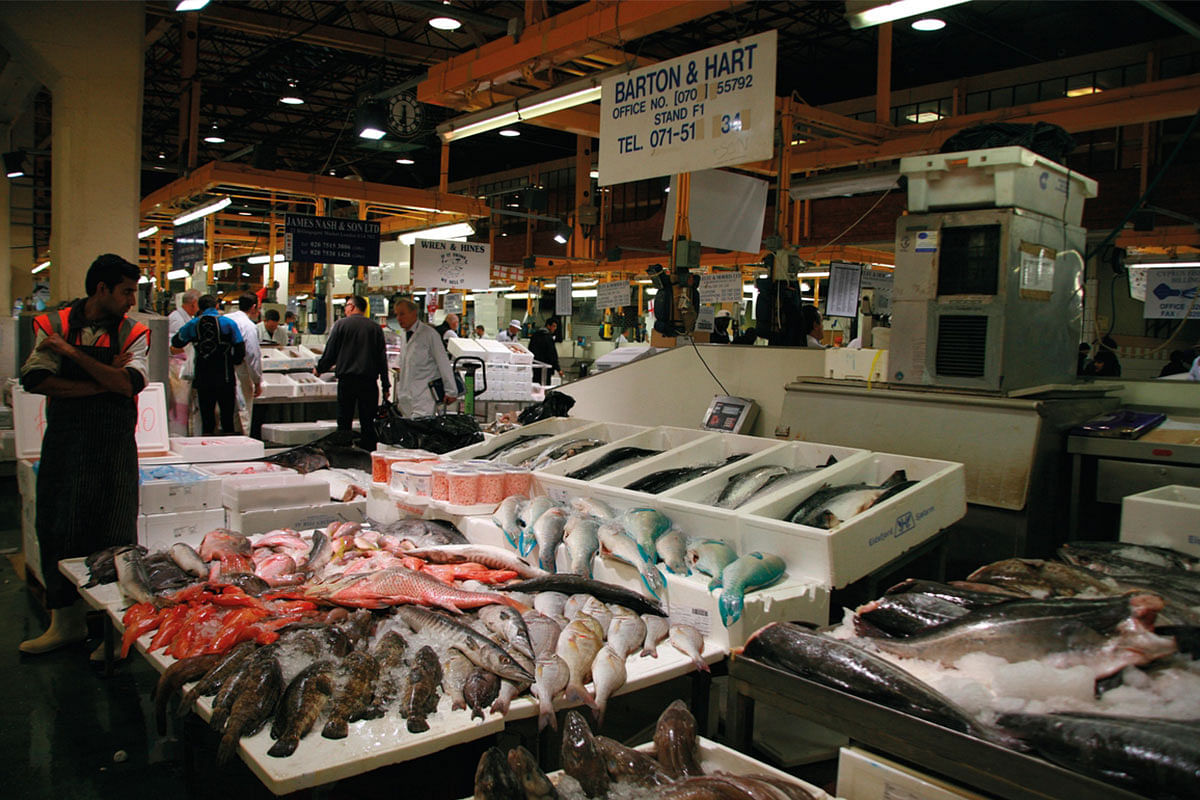 [dropcap size=small]A[/dropcap]fter the empty pre-dawn streets outside, the sudden brightness and noise of London’s Billingsgate Market are a shock to the senses. The vast, brightly lit hall is crammed with row upon row of stalls selling lobster, turbot and tilapia that will end up beautifully cooked and dressed on the porcelain plates of some of the UK’s most exclusive restaurants. But, before the seafood makes its way to those esteemed kitchens, it starts its journey here, where burly men in beanies and Wellington boots bark instructions, rip open crates of ice with thickly gloved hands, slap slippery fish into boxes, and push trolleys heavy with chilled crab and croaker to vans waiting outside. The market smells of the sea, the air is damp and the floor is wet; it’s like its own amphibious ecosystem coming to life as the rest of the city sleeps.

There is all manner of wild and wonderful sea life to be encountered in this chaotic world. There are boxes of giant crab claws, rows of glistening sole and pretty pink-toned snapper, and lines of bewhiskered catfish. At one stall, there is a small barracuda resting on a bed of ice, its long, slim body suggesting speed, even in death.

In addition to the varied sea life, the market seems even more otherworldly because of its location. It’s tucked away below the ultra-modern skyscrapers of Canary Wharf, which house the headquarters of some of the biggest banks and companies in the world. But you won’t find a suit or tie at the market.

“Let’s just say that the language sometimes used here isn’t fit for polite company,” says 78-year-old Ken Condon with a chuckle. “We have men from all over the world working here, but most of the characters are ‘East End geezers’ or ‘Essex boys’ who revel in Cockney humour, that special, London variety of comedy. There’s plenty of bawdy banter between buyer and seller, and among the staff .”

Condon, a guide who leads tours through the market, was a fishmonger for 50 years. He joined his father’s business, which had been running since 1921, in 1954. As well as selling fresh fish and seafood, he smoked salmon in a traditional brick smokehouse – something that’s now a rarity as most smoking is done in computer-controlled kilns.

“Salmon is a summer fish, and on lovely sunny days, customers would pull up at my shop in their Rolls-Royces with panniers of salmon they had just caught. They’d leave the fish with me to be smoked, and would return a week later to collect it.”

Condon retired in 2000, but keeps his passion for all things seafood alive by sharing his knowledge with visitors to the market. Lovingly referred to as “The Old Man of the Market”, Condon says that despite the coarse humour of the market floor, there’s a real sense of camaraderie among the men.

“One of the wholesalers once overheard me mention that winkle and watercress sandwiches are my favourite. Later, I found a bag of winkles labelled “Young Ken” waiting upstairs for me.”

Billingsgate is the UK’s biggest inland fish market, with about 150 species of fish on off er to buyers daily. London residents do occasionally make their way here to buy fish to cook at home, but it’s primarily a wholesale market.

A lot of the deals are struck by phone, with hotels, restaurants and retailers calling in to reserve their pick of the day’s stock. There’s a focus on fish caught in local seas, but fish is also flown in, both frozen and fresh, from all around the world.

“The market is unparalleled in terms of its species variety,” says Jeff Steadman, who directs his family’s wholesale fish business, Chamberlain & Thelwell, which has been operating since 1947 and supplies the top five-star hotels in London. “The world is a smaller place these days and we have fish coming in all the way from the Indian Ocean as well as local waters. London is very cosmopolitan with regards to food, maybe more so than any other city,” he says.

Steadman also owns and runs one of the capital’s most prestigious seafood restaurants, Chamberlain’s. Located in the 14th-century Leadenhall Market, a few miles from Billingsgate, Chamberlain’s specialises in high end, local, sustainable and seasonal seafood, with culinary classics such as Scottish lobster thermidor and Dover sole poached in champagne sauce on the menu.

Many of the wholesalers at Billingsgate will tell you that it is the fish of the North East Atlantic that is the finest in the world.

“There’s something about the waters here… Maybe it’s the continental shelf, or maybe it’s the temperature of the waters, but North East Atlantic fish is just exceptional,” says Condon. “Just think of turbot, brill, Dover sole and hake – they’re all excellent from these seas. Then there’s the lobster; native Scottish lobsters are the most sought after, followed by Canadian and then those from New England, Maine.”

“Customers would pull up at my shop in their Rolls-Royces with salmon they had just caught and leave the fish with me to be smoked.”

Billingsgate hasn’t always been located in east London at Poplar, Canary Wharf. It moved here in the early 1980s from the banks of the Lower Thames at Monument, where it was based for a thousand years, according to Condon. In years past, small trawlers would bring in fresh seafood daily on the Thames, but increasing traffic through the City of London meant that the market had to be moved to a more accessible location.

But while the venue has changed, the significance of the market has not. The increasingly globalised world has also meant that the sheer variety of species at the market has increased.

“The seafood market is always interesting, even to the untrained eye,” says Steadman. “If you know your seas, of course it’s even more fascinating.”

Visitors – with trained or untrained eye – to this peculiar, slippery world are more than welcome. But it’ll require a very early start as the market starts trading at 3am, with most of the action over by 7am.

If you do make it for a visit, feel free to linger, but don’t get in the way. You might just feel a trolley stacked with ice and fish nudging your Achilles and be reprimanded with a joke in Cockney rhyming slang.

FISH LORE FOR THE DAY

Lessons for the foodie. 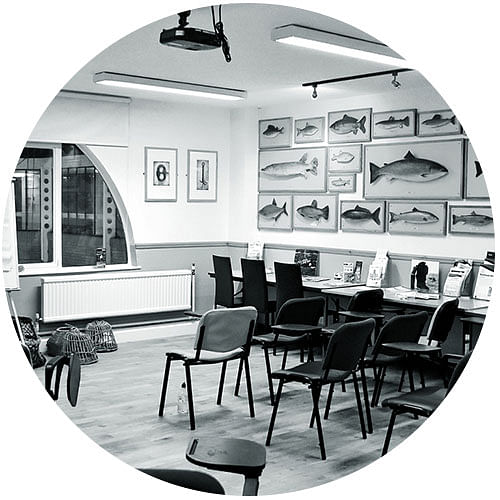 The Billingsgate Seafood School offers early morning tutored tours of the market when the action is in full swing. The guided visit teaches about the huge range of species available at the market daily and how to tell if they are the seasonal best. The organisation also offers other courses for food lovers and chefs, including cooking classes and knife-skill workshops so you can “gut, fillet, and shuck like a fishmonger”.

C. J. Jackson, former vice-principal of London’s prestigious Leith’s School of Food and Wine, and author of the Leith’s Fish Bible and the Billingsgate Market Cookbook, has been CEO of the Billingsgate Seafood School for the last decade. She says that the school was set up as a charity to support the training of chefs at catering colleges, as a self-funded school to teach children about the seafood and the world’s seas, and to help develop the F&B industry through high-level courses for professional chefs and hoteliers.

“We focus very strongly on the provenance of seafood, and always follow ASC (Aquaculture Stewardship Council) and MSC (Marine Stewardship Council) guidelines,” she says. “Whether it’s for our Morning Catch guided tours or our courses for experienced chefs, we take sustainability seriously.”