Lifestyle quarter Quayside is set to add colour to this sleepy quay with new dining options and a luxury InterContinental hotel. 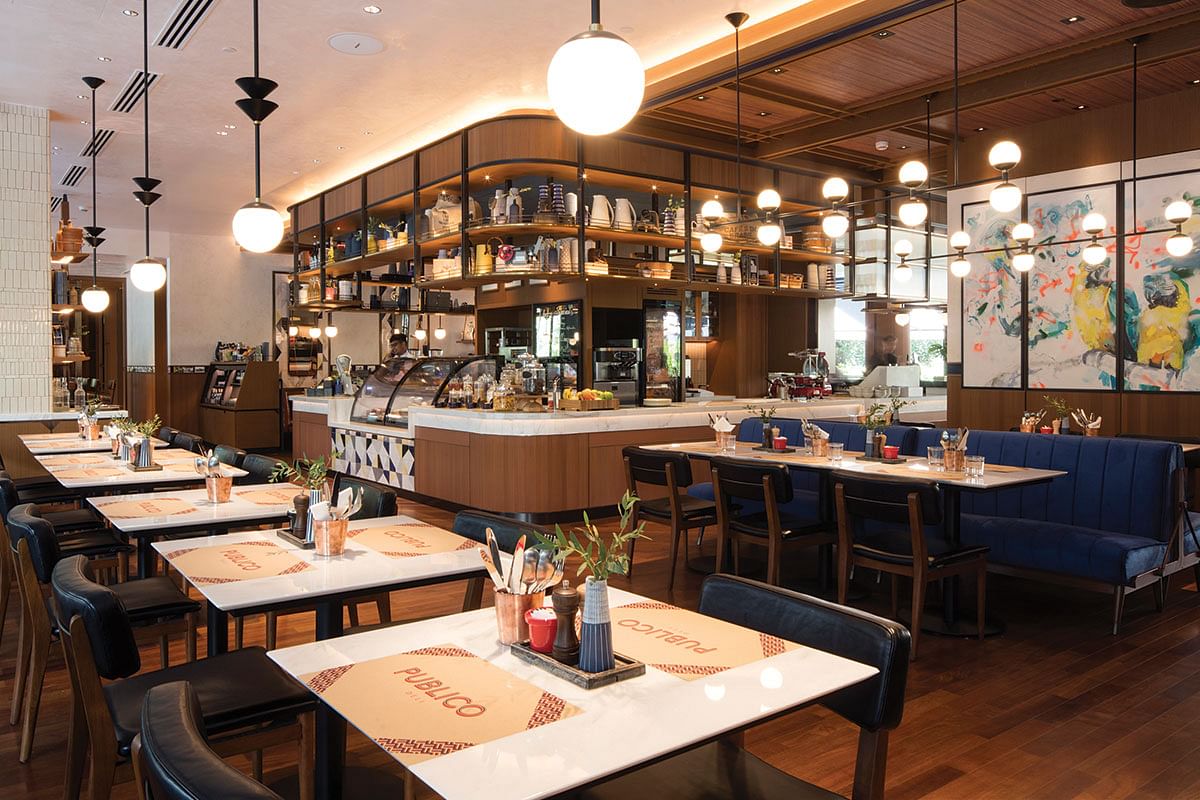 [dropcap size=small]O[/dropcap]ut of the three quays along the Singapore River, Robertson Quay is perceived as a quiet, residential enclave compared with its cooler, party-centric neighbours.

With the addition of Quayside, a new lifestyle quarter, a shot of energy has been injected into the sleepy area.

Featuring a collection of eclectic restaurants and bars, a private members’ club and the luxury InterContinental Singapore Robertson Quay, Quayside is the latest and biggest addition to the area in recent months. In the past year, M Social Singapore and The Warehouse Hotel have opened nearby.

The $900-million Quayside project is the brainchild of Kishin R.K., the 34-year-old chief executive officer of property and hotel group RB Capital.

In 2012, he paid $69 million for the ground-floor river-fronting retail podium that has apartments above it.

A year later, he acquired the boutique Gallery Hotel next door in Nanson Road for $232.5 million.

He says he saw the potential of the site that was once swampy tidal land in the 1890s.

“This area of Robertson Quay was past its relevance when I came in. The neighbourhood needed a reinvention,” he says.

For the project, he hired Singapore-based architect Chan Soo Khian, who founded and helms SCDA Architects. The multi-disciplinary award-winning practice has a range of projects, from private residences to commercial and institutional properties around the world, including in New York, Bali, Dubai and Shanghai.

On this project, Chan, 55, was the master planner for Quayside, as well as the architect and interior designer for the hotel. He was also behind the landscaping.

Taking notes from the area’s history, where the old warehouses and shophouses were built with steel, iron fixtures and stone, he designed a monochrome look for the retail podium.

The heart of this cluster is a collection of restaurants and bars boasting stylish interiors and varied food options.

Before deciding on the tenant mix, Kishin and his team spent months talking to residents of the area to see what they wanted.

For example, they realised there are many singles in the area who do not cook often. So many of the restaurants offer take-out.

The restaurants and cafes are fronted by a spacious pedestrianised promenade that is lined with trees. Awnings allow diners to sit outdoors.

Well-placed lighting accentuates the podium’s architecture and creates a shimmery glow when the light hits its metallic features, lending the property glamour at night.

Towering over the retail podium next door is the 225-room InterContinental Singapore Robertson Quay. It opened last Thursday.

The original Gallery Hotel, which was built in 1999, was gutted out to make way for the new entrant. The first three levels are filled with more dining establishments and a private members’ club. The hotel’s lobby is on the fourth floor.

The first floor is taken up by Publico, a multi-concept restaurant and deli, and Marcello, Singapore’s first Italian cocktail bar. Both are designed by AvroKO, a design and concept firm which has its headquarters in New York.

The second floor is home to Wolfgang’s Steakhouse, by chef Wolfgang Zwiener, and Ishi, a sushi restaurant.

One floor above sits the much anticipated private members’ club, 1880. Designed by British superstar designer Timothy Oulton, who is known for his vintage and classic masculine English style, the club is the last piece of the Quayside puzzle when it opens next month.

Canada-born Singapore permanent resident Marc Nicholson, 48, 1880’s founder, is excited to move into the neighbourhood. He was previously the chief executive officer of the two Truefitt & Hill Singapore barbershops, the local offshoots of the famed London chain.

He says: “Kishin shared his vision for Robertson Quay – that it would be our very own version of the Meatpacking District in New York or Shoreditch in London, before it became too cool.

“He spoke of a new energy and vibe. He imagined a new waterfront for Singapore that is forward-looking, but also pays tribute to our past. I knew I had found a home.”

Pulling all the different elements together was a massive undertaking for Chan. But he says that creating the blueprint for the entire mixed-use development, instead of tapping various specialists, has made Quayside look like a “seamless” project.

The architect, who is a multiple President’s Design Award winner, says: “I was entrusted with the whole scope, which makes the project more pure and holistic.

“I think that’s the way to go with design. The trend now is to go with specialists, but I believe a holistic approach to design results in a better overall product.”

Long-time Robertson Quay resident Sally Woodcock, 61, says that enduring the construction for the last few years for this new development has been worth it since the area is now “much improved”.

The expatriate from the United Kingdom, who has lived in the area with her husband and daughter for the last nine years, says: “The new restaurants enliven the area and there are more choices now. The place looks much smarter too.”

It has been only about four months since Quayside has been launched in phases, so it remains to be seen if the development will still attract crowds after its novelty factor wears off, says Dr Seshan Ramaswami, 52, associate professor of marketing education at the Singapore Management University.

But he points out that businesses here do not need to compete with the other quays for the same crowd and should offer a different experience.

“It could provide for a nice contrast – a more sophisticated and elegant dining experience – compared with the other more boisterous quays.”

Situated from the fourth to 10th levels of the mixed-used development in Nanson Road, the 225 studios and suites in InterContinental Singapore Robertson Quay feel more like fancy homes than a temporary stay.

For example, the rooms do not have desks as many people like to work in bed or just have no need for one. Instead, guests can lounge on a cosy chair by the window and take in views of the Singapore River or downtown area. The rooms also have sliding doors that can close off the bathrooms from the bedroom or be kept open for a spacious feeling.

Jazzing up the standard in-room bar is a do-it-yourself cocktail kit.

There are also copper accents in the furniture and fixtures – a throwback to the copper coins that were used in the 1800s along the quay.

Kishin R.K., who is chief executive of property and hotel group RB Capital, the hotel’s developer, says: “We didn’t want to do a literal interpretation and have pictures of copper coins around the hotel. Putting it into the design is more subtle.”

Regular guests of the hotel brand will notice the Robertson Quay outlet is different from its sister property, InterContinental Singapore in Bugis. There is no dramatic entrance or an opulent grand lobby with chandeliers. Instead, guests pop up to the fourth floor to check in at copper-coloured desks and lounge in a living room-style lobby that overlooks the small pool outdoors.

Kishin and Chan had to sell their idea of a hotel that boasts of bespoke, understated luxury to InterContinental Hotels Group (IHG), which manages the property. Kishin says: “This is not your typical core luxury hotel look. IHG trusted us enough to come up with a hotel that would fit the area.”

As for food options, guests can pop downstairs to Publico Deli on the first floor, a 160-seat daytime gourmet delicatessen that focuses on fresh Italian produce. By night, hidden walls and partitions are adjusted and closed cabinets opened to transform the space into Marcello, a classic Italian-style aperitivo bar.

There is also the 229-seat Publico Ristorante next door, which offers Italian cuisine and is set up with two pizza ovens. Outdoors, there is a terrace lined with rustic wood planters as well as terracotta and concrete pots.

These two restaurants and watering hole could be anointed as a “Little Italy” of sorts, given that the inspiration for its interiors was the Italian lifestyle and culture.

They were designed by AvroKo, a much sought-after multi-disciplinary design firm that has its headquarters in New York.

Inspiration came from the bold designs of mid-century Italian artists, the country’s rich heritage of stone and decorative craftsmanship, and the breezy Amalfi coast.

One of AvroKo’s founding partners, William Harris, says: “The coffee and aperitivo culture and celebration of simple pleasures – all with a bit of swagger and style – begged to be here. We weren’t interested in pursuing anything dark or rustic as that (style) is at a saturation point.

“When we saw the sprawling footprint of the venue and spent time in the location, we felt a little taste of la dolce vita would be a perfect fit.”hat overlooks the small pool outdoors.