Leave technology and stress behind at this island getaway that’s shaped like a dropped pearl. 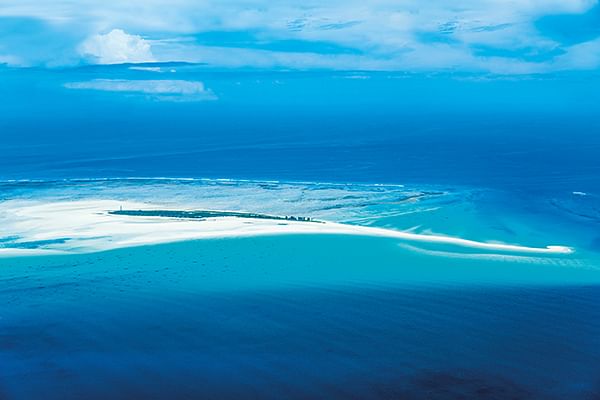 [dropcap size=small]A[/dropcap]s our nine-seater plane approaches the diminutive island of Medjumbe, all on board are silent. Cameras click like paparazzi shutters on a red carpet, but the until-now-constant conversation has ceased, as we all gaze down at the swirls of turquoise, green and white some 1,500m below.

As I turn to check out the view on the other side of the plane, I catch sight of Ilse, one of my travelling companions. Her customary warm grin is accompanied by fat tears rolling down her cheeks. The vistas of Mozambique’s Quirimbas Archipelago are quite simply so outlandishly beautiful, that they have moved a particularly well-travelled woman to tears.

You know all those trite cliches that travel writers love to sprinkle around? Well it’s very possible that many of them were thought up on Medjumbe. The sand is as fine as talcum powder, the azure ocean does gently lap at the shore and, if ever there is a place to apply the word “idyllic” or “paradise”, then this would unequivocally be it.

Medjumbe is tiny – less than a kilometre long and around 300m wide. It is home to a crumbling lighthouse, an energetic population of ghost crabs, close to 30 species of birds and a luxurious lodge consisting of twelve thatch-roofed villas, each with its own plunge pool. That is all and it is more than enough. There are no vehicles – no roads for them to drive on anyway; no malls; and no cellphone reception, although Wi-Fi is available in the lobby if you really, really need it.

Like the rest of the Anantara Medjumbe Island Resort, the lobby was refurbished earlier this year. The palette largely reflects the island’s natural surrounds – the pale beige of the sand; the navy, turquoise and teal of the ocean. But splashes of colour serve as a reminder that, although you’re a 45-minute flight from mainland Africa and on an island that is blissfully mosquito-free, this is still Mozambique. Baskets inspired by traditional weaving adorn the walls, and there are fabrics with brightly coloured, geometric designs that are reminiscent of the colourful capulana (a type of sarong) sported by every other Mozambican woman you meet.

I can tell within minutes of arriving that our stay here will be too short. Perhaps a month would be too short. Despite the fact that there are no bars, stores or museums on Medjumbe, there suddenly seems so much to experience.

I instantly set a morning alarm, willing to forego the anticipated holiday lie-in to spend those extra moments enjoying the island. It’s a wise move. The following day, I take a solo stroll along the spit, a sand bar stretching into the ocean. Where in life can you be this tranquil, this far removed from the hustle of normal life? There is no electricity pylon in sight, no high rise buildings marring the view, nor honking horns marring the peace. There is just the gently ebbing ocean and a dhow captain readying his boat for a pre-breakfast jaunt.

Dhows have been a part of the Quirimbas life for more than a thousand years, long before the Portuguese arrived with their larger ships. Used first by Arab traders and later by Mozambican fishermen, the boats have recently found a new lease of life here, acting as pleasure vessels for visiting travellers. I am one of the passengers on today’s trip, and it feels great to wade through the rapidly warming ocean before hauling myself aboard. Our skipper is Anli, a Quirimbas-born fisherman who staff insist could sail before he could walk. I tear my eyes away from the endless turquoise ocean to watch him adeptly handling the small boat, and I half want to continue on into the 30-plus islands of the Quirimbas, exploring mangroves and ports filled with histories of pirates and slaves.

But the winds get us halfway to neighbouring Quissanga Island, when our rumbling stomachs remind us that breakfast awaits back on Medjumbe, so Anli adjusts the rigging and guides us back to shore.

Mozambique is known for its seafood. The country’s juicy LM prawns are highly sought after in neighbouring South Africa and freshly caught crayfish is readily available along the country’s 2,500km Indian Ocean coastline. So it seems fitting for us to fill our rumbling bellies with the resort’s signature breakfast, Island Benedict: an English muffin topped with lobster, poached egg, bacon and curried hollandaise sauce.

Feeling the need to pay for all the hedonism, when my alarm sounds the following day, I head to the water-sports centre for a pre-crayfish SUPing, or stand-up paddle-boarding. There are many oceanic endeavours on offer (water-skiing, dhow sailing and scuba diving among them), but SUPing around Medjumbe is my kind of water sport.

It’s peaceful, it’s gentle and there is no chance of being hit in the face by a colossal wave or eaten by a shark.

The waters here are shallow and calm – more lagoon-like than ocean-like. We paddle past the breakfast area where others are starting to assemble for coffee and Portuguese pasteis de nata, past the island’s eastern-most villa, which houses a charming little spa, and make for the lighthouse.

Built by the Portuguese in the 1970s, the lighthouse soon fell into disrepair, but has become a cherished feature of the island’s landscape. Sadly, the lighthouse has been earmarked for demolition, with Mozambique’s Marine Affairs department planning to rebuild a modern version
of it.

The day ahead is to be one of oceanic adventures. Once beach bags (provided by the resort) are packed with sunscreen, sandals and sarongs (also provided in rooms), our group of seven board a power boat bound for Quissanga. Although it seems improbable, tiny Quissanga is more peaceful still than Medjumbe. There is nothing here at all save for palm trees, nesting weaver birds and a thatched gazebo where mimosas await us as we disembark.

Our group splinters, demonstrating how each of us prefer to relax. Some snorkel off Quissanga’s shores, others take the half-hour stroll around the 600m-long island while a couple stays in the shade, sipping cocktails until lunch is ready.

Lunch was described to us as “picnic on a Robinson Crusoe island”, but if Crusoe ate half this well, I doubt he would have been so anxious for rescuers to arrive. Chefs ferried over from Medjumbe earlier that day jostle for space on the barbecue grill, serving fresh fish, tender steaks and crayfish, of course, all drenched in lashings of garlic butter. It is all we can do to heave ourselves into the boat in the afternoon to be shuttled, full and happy, back to our lodge.

(RELATED: Why a cruise aboard the Amandira is a ticket to nature’s paradise.)

Until now I haven’t had much chance to properly explore my villa, so I vow to spend a few hours getting acquainted. It’s the kind of vacation accommodation thought out by someone who has travelled a lot; someone who spends more time than most in upmarket lodgings. Every aspect has been carefully considered to ensure life is as easy and enjoyable as possible for those lucky enough to stay here. The lavish fruit platter, selection of fine teas and the high quality coffee maker appeal to those who prefer to remain on their deck in the morning rather than peruse the breakfast menu; the “gym in a bag”, consisting of a yoga mat, weights, a skipping rope, plus suggested exercises, is made for those who feel they have over-indulged in crayfish; and no one could fail to be impressed with little touches that exemplify the outdoor life of Medjumbe. They seem like little things, but the designated space for hosing off sandy feet before stepping on your deck, the outdoor towel rail so post-pool towels don’t have to sit on loungers to dry, the connecting door between indoor and outdoor showers – these all join to make your stay seamless. As we dine with our feet in the sand on our last night on Medjumbe, the island has one last treat in store.

Our stay ends with what I can describe only as Mother Nature’s answer to a fireworks display – over on the mainland, a lightning storm is in full swing but, on Medjumbe, it is warm and dry, with just a light breeze keeping flies at bay.

As I enter my private pool for a post-dinner dip in the moonlight, the brightest shooting star I’ve ever seen briefly lights up the sky. I suspect that there will be far more tears on departure than there were on arrival.

Gateway to the Quirimbas and capital of Cabo Delgado province, Pemba is a sizeable city with a laidback beachside vibe. Most people spending time in the ilhas, or islands, spend a night or two here and you could do a lot worse than finding a guide to take you to Chuiba Palms. The dirt road is rutted with potholes that in rainy season are transformed into puddles large enough to lose a small car in. But the slow and bumpy ride is worth it.

The russet earth of the road, the vivid green of palm trees, the shiny-coated goats munching in the undergrowth and the pastel-painted rural houses punctuating the road combine to make a setting so photogenic, you have to ask your driver to stop every 100m or so.

Your destination is a simple beachside barbecue shack with an ocean-facing pool, tables under thatch and ice cold 2M, Laurentina and Manica beers waiting to be guzzled. But the star of the show is the food. This place is nothing fancy – dishes contain no jus, no foam; nothing is freeze-dried or sous vide or deconstructed. But everything is cooked to perfection – honest cooking that showcases the fabulous base ingredients: lobster, freshly caught fish, simple steamed rice and a tangy tomato gravy. If you’re stopping over in Pemba before a flight to Medjumbe, it’s a perfect introduction to the decadence that awaits. If this is your post-island pit stop, the city makes a fine, colourful and very, very flavourful farewell to northern Mozambique.