The French capital boasts more than 700 beehives, most located on rooftops such as those of the Tour d’Argent restaurant, the Grand Palais, and the Musee d’Orsay. 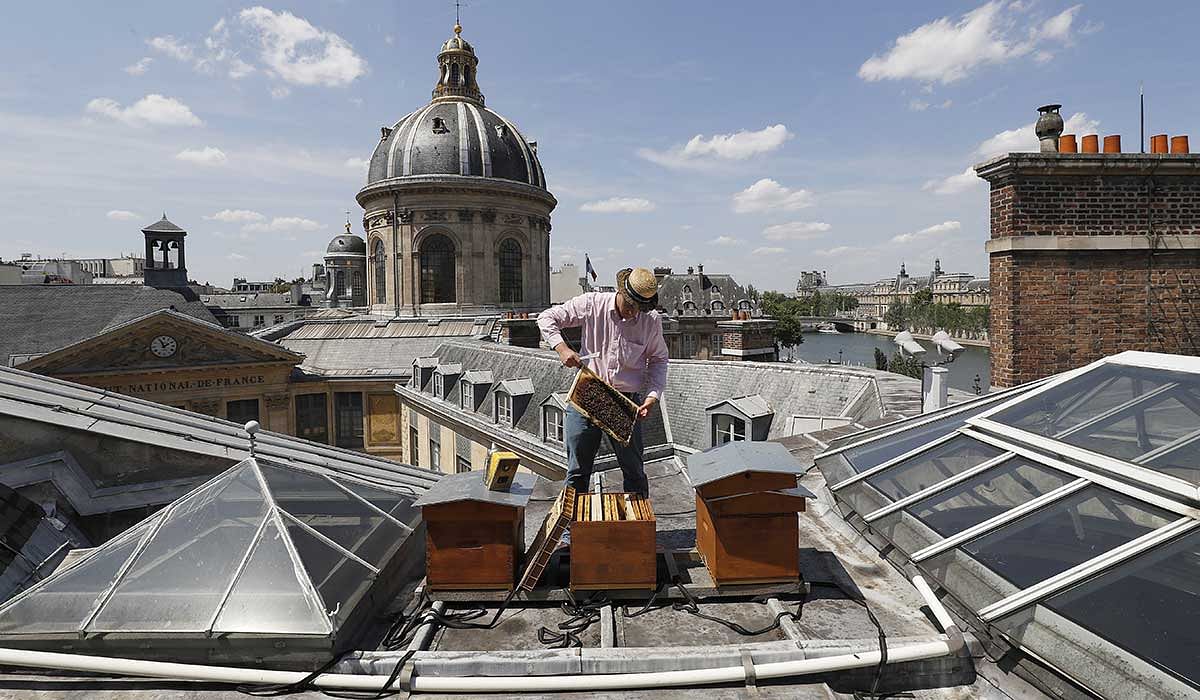 https://www.thepeakmagazine.com.sg/lifestyle/pariss-urban-rooftop-hives-hope-preserve-honeybees/
Gallery Format 53048
image
Audric de Campeau is a French urban beekeeper, and his beehives sit atop monuments and office buildings and on rooftop terraces in the French capital.
image
Paris today boasts more than 700 beehives, according to 2015 figures, most located on rooftops such as those of the haute cuisine Tour d'Argent restaurant, the Grand Palais and the Musee d'Orsay.
image
Urban rooftops are one of the ways Paris is fighting against the "worrying" decline in the bee population, a trend France recognised early on despite its elevated use of pesticides.
image

To check the beehives he has set up on the roof of the sprawling Monnaie de Paris on the banks of the River Seine, Audric de Campeau slips on a harness over tan-coloured trousers. The beekeeper then hooks his leg harness to a metal cable anchored to the roof’s edge, running the length of the entire structure. “It’s not dangerous, but my insurance insists on it,” he says.

Elegantly dressed in a tweed jacket, pink shirt and straw hat customised with a protective net, he steps carefully between the rafters to reach the three beehives he set on the flat side of the roof.

From there, the 34-year-old will head to the roof of the neighbouring Institut de France, another historic building with a majestic domed centre.

He will don the same leg harness on the rooftop of the Boucheron fine jewelry boutique overlooking the Place Vendome square, on the other side of the Seine, before making his way to his three beehives.

In the distance, the Eiffel Tower rises far above the slanted Parisian rooftops.

“I’m lucky, my office is in the sky,” he says, smiling, adding that he does have “to climb a lot of stairs”.

De Campeau is an urban beekeeper, and his beehives sit atop monuments and office buildings and on rooftop terraces.

The French capital boasts more than 700 beehives, according to 2015 figures, most located on rooftops such as those of the haute cuisine Tour d’Argent restaurant, the Grand Palais and the Musee d’Orsay.

More and more companies, including AFP, are also adding beehives to the tops of their office buildings.

Beehives have long sat on the roof of the Paris Opera, and the Luxembourg Gardens has had beehives since 1856.

Urban rooftops are one of the ways the city is fighting against the “worrying” decline in the bee population, a trend France recognised early on despite its elevated use of pesticides. The country is one of Europe’s leading users of pesticides.

The more pesticides are used, the more pests develop resistance to them, which leads to even more intensive use of pesticides.

Bees around the world – especially in Europe and North America – have been decimated in recent years by a mysterious blight called “colony collapse disorder”, in which entire populations disappear or die out.

Research has pointed an accusing finger at agricultural pesticides, viruses, fungi, parasites, poor weather, malnutrition because of fewer flowers – or some combination of the above.

According to the EU economic and social advisory committee (EESC), “nearly half of wild bee species have disappeared in just 30 years”.

But more than just the survival of the bees is at stake.

Scientists have calculated that 1.4 billion jobs, and three-quarters of crops, depend on pollinators, mainly bees. All told, there are some 20,000 bee species that fertilise more than 90 percent of the world’s 107 major crops.

At the same time, the United Nations estimates that 40 percent of invertebrate pollinators – mostly bees and butterflies – are at risk of extinction.

In an effort to defend the bee, the northern French city of Lille began providing pesticide-free environments in 2007.

The southern city of Montpellier soon followed by installing beehives on the roofs of many high schools.

Though experts say it may not solve the problem, Lille’s environmental services said 80 species of wild bees that had disappeared from the area have returned since beginning the programme.

De Campeau sees his mission as two-fold: take care of the health of his bees while also producing what he calls “liquid gold” for his company, “Le Miel de Paris” (Paris Honey).

Depending on the agreement he has with building owners, either he sells the honey or they use it. At the Monnaie de Paris, chef Guy Savoy uses de Campeau’s honey in his restaurant desserts.

As well as honey, de Campeau also makes mead – an ancient alcoholic honey-based drink – in oak barrels once used for wine or sherry that are stored in a secret cellar 30 metres (100 feet) underground.

For a man who spent his youth illegally exploring the underground Catacombs of Paris, de Campeau feels right at home.

“Stable temperature, high humidity, perfect to prevent evaporation, and zero vibration,” de Campeau said, adding that these factors are essential for raising a blend “worthy of a great vintage”.