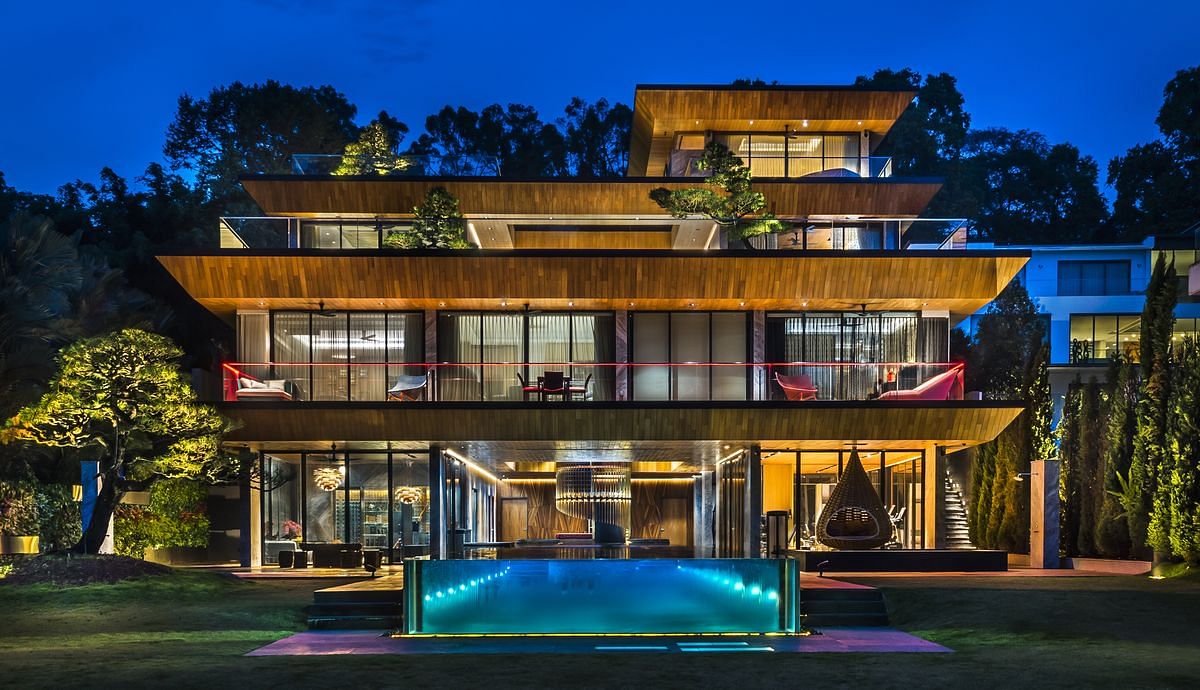 [dropcap size=small]F[/dropcap]ilial piety. Hierarchy. Family. While traditional Asian values may wane in this day and age, such is not the case for this household. Setting out to build a house for his multigenerational family, a managing director of a listed company – who prefers to remain unnamed – gave the task to Ta.le Architects. The brief: to build a home that could house his entire family, so as to uphold those Asian values which he holds dear, and do more. Much more.

He also wanted the house to serve the dual purpose of being a space where he could host business associates, extended family and friends. Thus, it was paramount that a battery of amenities be included in the design of the house – such as a movie theatre, KTV room, swimming pool, sauna, fitness centre, squash court, wine cellar and a pool table – so as to keep guests perpetually entertained.

For Ta.le Architects, the challenge was designing a house to accommodate four generations: the client and his elderly parents, his four children and one grandchild. This required them to understand the nuances of each generation in the family. Says the founder and principal architect of Ta.le Architects, Tay Yanling: “Ultimately, we needed to really understand the family hierarchy and the relationships between the different family members. This would then guide us in the overall design of the home, enabling us to balance the connections between intimate private spaces and communal spaces in a way that harmoniously reflects the family culture.”

Besides that, the original building set on this plot of land is a conserved 20th century plantation house, which served as a home to a British military officer and his family during the early 1920s. It sits atop terraced grass fields, overlooking a woodland area with historic tembusu and angsana trees.

This posed another challenge of having to preserve the image of the plantation estate, which meant having to design a structure or extension that would not compete with the original building architecturally and visually.

Standing at a whopping 29,000 sq ft., this house on Ridout Road was designed by Ta.Le Architects, alongside Produce.Workshop.

To ensure harmony in the family, it was important to find the right balance between intimate private bedroom space and open communal spaces.

The house accommodates up to 200 guests, and includes facilities such as a swimming pool, wine chiller, lounge room, pool table, fitness centre, squash court, and sauna.

Greenery, foliage, water and wood are common motifs throughout the house.

This careful merging of nature with the modern living spaces – symbolising the old and the new – accurately captured the dynamic balance of having a house shared by four distinct generations, each with their own mannerisms and idiosyncrasies.

Green platforms and timber ceilings make for an effective shelter while being intentionally riddled with strategic light wells for ventilation and natural lighting.

Timber was used to clad the ceiling for a stylish subterranean look.

Timber was used to clad the ceiling for a stylish subterranean look.

One of the key design philosophies was to let an uncomplicated material palette speak for itself, instead of resorting to extravagant ornamentation.

The exterior of bridging spaces.

The solution put forth by the team at Ta.le Architects in collaboration with designers from Produce Workshop, is an extension that’s 12 times the size of the original building, clad in green platforms to retain the image of a single bungalow in the midst of lush, serene greenery – and aptly christened the “Hidden House”. “It was critical that one should be able to view and appreciate the surrounding greenery from any part of the house,” says Pan Yicheng, collaborating designer from Produce Workshop.

Drawing inspiration from the traditional Chinese quadrangle house, or si he yuan, the extension’s design is structured and not overly flamboyant, a trait that’s said to be characteristic of the client. Symmetry and hierarchy reign as the bedrooms and private areas are spread across the three upper floors, arranged hierarchically with the master bedroom at the top, and children’s rooms at the lower levels – reflective of the traditional family order and structure.

A courtyard-esque space in the middle of each of the house’s three quadrangles makes for a common area for members of the family to interact.

In the house, timber-clad ceilings give an expansive look and a sense of spaciousness, as far as ceiling space is concerned, while being perforated by a series of light wells, introducing natural light and air into the communal spaces. Copper panels complement the pink bricks on the bungalow’s facade, while also providing shade and privacy for the interiors.

“We incorporated nature – from greenery and foliage to using water and wood throughout – and paid respect to the older colonial building that overlooks the entire project,” adds Tay. “This interweaving of nature and modernity, old and new reflects the complex family hierarchy and relationships that exist in the Hidden House.”
Related:

Good class bungalows in Singapore: What you need to know before purchasing one

What to know before investing in a shophouse