How did this Singapore architecture firm become the 10th largest in the world?

They count the Esplanade, Golden Mile Complex, and Singapore Sports Hub among their projects. 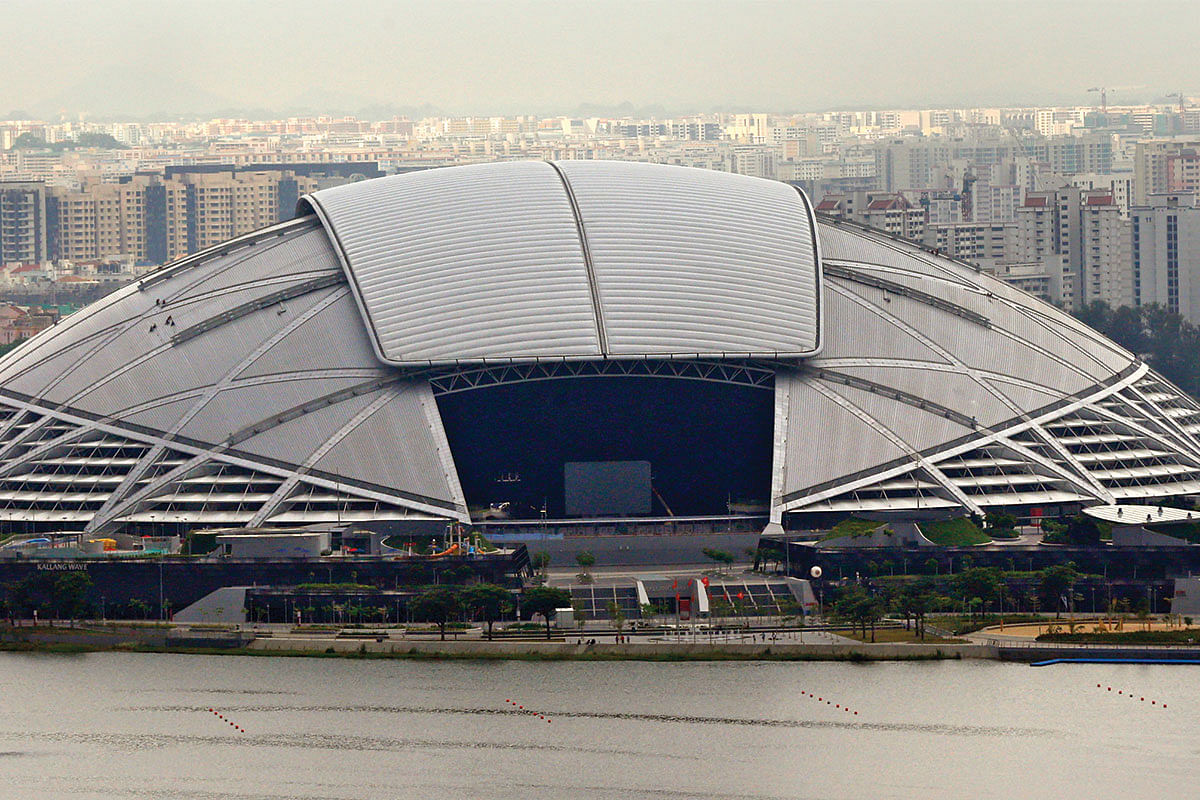 [dropcap size=small]T[/dropcap]hrow a stone in Marina Centre or on Orchard Road, and chances are that it will hit a building that has been designed by DP Architects.

The homegrown firm is behind landmarks such as Suntec City, Marina Square, Esplanade – Theatres on the Bay, Wisma Atria, Paragon Shopping Centre and Orchard Central.

This year, DP Architects celebrates its 50th anniversary, and the company’s growth has evolved in tandem with Singapore’s nation-building, becoming an important contributor to the country’s public projects and urban development.

Back in 1967, the firm was known as Design Partnership, and it was one of the three firms that emerged as a result of the dissolution of Malayan Architects Co-Partnership.

Design Partnership was formed by passionate Singaporeans who felt that, in the aftermath of colonialism, the country should develop its own personality and identity as an island city-state with a diverse population.

Architects William Lim, Koh Seow Chuan and Tay Kheng Soon were the firm’s founders. Today, only Koh is still with the firm as its senior consultant. Lim and Tay have gone on to establish their own firms.

Koh recalls that back then “the practice was simpler, projects were less complex, and we didn’t have the mega properties that we have today”.

He also remembers that the government was “keen to see how the country can stimulate the economy and how to generate investment”.

The firm felt that it should not be doing more of the same, but to do something that would be a stimulus. The result were two iconic buildings that were completed in the 1970s and are still standing today: People’s Park Complex and Golden Mile Complex. These two buildings helped introduce Singapore to new styles of modernist architecture, and paved the way for a number of projects that adopted similar mixed-use programmes – combining retail and other typologies in a single development.

Koh, 78, believes that the firm can sustain itself for many decades thanks to “creating an environment in which talented people can work as a team”.

(RELATED: What does a Singapore architect&#8217;s home look like?)

The firm had succession planning right from the start, making sure that talented people had the chance to be leaders.

In 1975, Design Partnership changed to DP Architects, from a partnership to a privately listed company. The partners formed a board of directors who held shares of the company.

Apart from People’s Park Complex and Golden Mile Complex, Ridgewood Condominium and Marina Square are Koh’s other memorable projects. Ridgewood at Mount Sinai was one of the earliest condominiums to be built in Singapore.

“We worked with a foreign consultant on Marina Square and had to develop a culture of humility,” says Koh. “We didn’t have to be subservient, but we had to be prepared to be open-minded.”

Over the decades, the firm also worked on projects around the world, including countries such as Bahrain, France, Kazakhstan, Mongolia, Pakistan, Poland and Timor-Leste.

Some of DP’s projects – The Dubai Mall (largest covered mall), Singapore Sports Hub (largest public-private partnership project) and SEA Aquarium at Resorts World Sentosa (largest aquarium) – were the largest of their type at the time of completion.

DP has also been involved in several corporate social responsibility initiatives such as Goodlife! Makan, a multi-generational communal kitchen and pioneering prototype offering fresh perspectives on addressing the social isolation of stay-home elderly; and Project Bus Stop, a concept bus shelter that test-beds innovative ideas on how infrastructural amenities can be re-imagined as meaningful social nodes.

CEO Angelene Chan, 53, who has been with the firm for 27 years, said her goal for the next few decades is to further grow the DP brand globally. “We want to establish ourselves as a design force in Singapore and globally. I want DP to be more recognised in the world.”

Ms Chan’s first project with DP was on Suntec City. The CEO since 2016 plans to groom specialised technical talents within the firm – with teams specialising in areas such as hospitality and infrastructure.

Over the years, she has had her share of ups and downs. Disappointing moments include losing out in design competitions, such as for Marina Bay Sands.

“But it was a totally different feeling when we won for Resorts World Sentosa,” she said, recalling how everyone wore red on the day of the announcement. “There were lots of screams of joy and crying when we heard the results on TV. Since then, everyone wears red when there are big competition results to be announced.”

To celebrate its 50th anniversary, the firm is showcasing many of its works in an exhibition titled A Common Line | One Global Studio.

Visitors can browse through over 2,000 architectural drawings of 650 projects, from 1967 till today. These drawings have been carefully reproduced from archival drawings, blueprints and microfilms. They collectively chronicle DP’s ongoing exploration in shaping the public domain.

Besides drawings, there will also be 32 architectural models, at varying sizes and larger-than-typical building models.

Another exhibition highlight is a wall-sized illustration, titled Building Blocks, by local artist Lee Xin Li. The illustration shows a fictitious city that has more than buildings by DP Architects.

(RELATED: These four unique bungalows at King Albert Park are in a good class of their own.)

Ng San Son, senior associate director and the exhibition’s curator, hopes that visitors will enjoy looking through the drawings and get a better understanding of architecture.

Five decades on, DP Architects is not resting on its laurels. “The firm is still a work-in-progress,” said Koh. “This is the philosophy that will drive DP to its 100th anniversary.”

A Common Line | One Global Studio is on at The URA Centre is located at 45 Maxwell Road, from Aug 12 to Sept 29, 9am to 5pm daily (closed on Sundays). There is a 30-minute architect-guided tour on Saturdays at 11am. Register online at http://bit.ly/2woSCU7