Smartphones and social media promise to connect you to the world. But new research suggests their addictive technologies are keeping you enthralled by a different reality 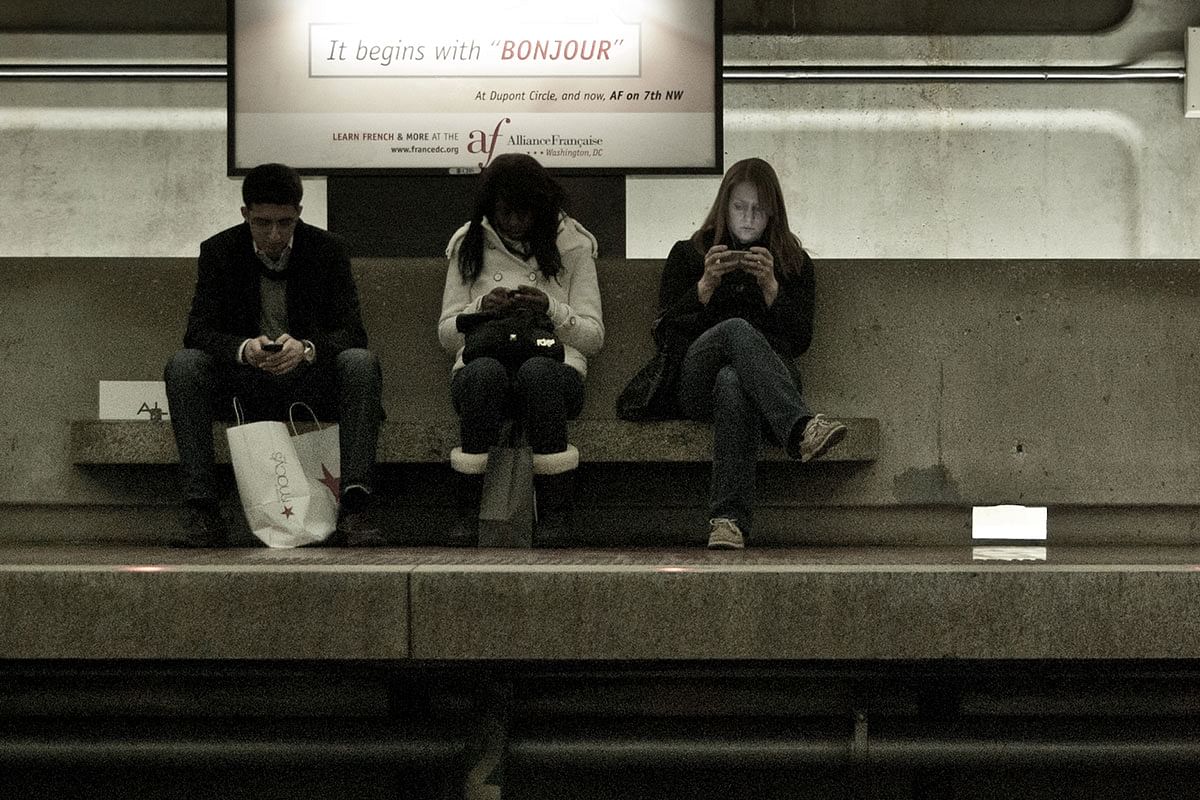 [dropcap size=small]”G[/dropcap]et off the phone!” When you were a kid, that four-word exhortation would be issued to you when you had been (1) hogging the home phone talking to a friend; (2) doing so at the expense of your homework; and (3) preventing everyone else from getting calls that were presumably more important.

Today in the age of personal cell phones, a remark like that is heard much less often. Almost everyone has a mobile device or two. And it’s easy to understand why you’d want to stay connected all of the time to your Whatsapp chats, e-mail updates, and professional and social media accounts. For one thing, their designs are just so persuasive. Virtual communication has never been more fun.

But growing evidence now suggests that “get off the phone” may just be the sound advice you need to heed. Addictive smartphone technologies are damaging not just attention spans and cognitive capacities, they’re causing anxiety and depression.

A widely-read recent article in The Guardian titled “Our minds can be hijacked: The tech insiders who fear a smartphone dystopia” interviewed Silicon Valley tech executives who have taken the radical step of blocking themselves and their children from addictive technologies. Ironically, they invented the technologies, but now see them as detrimental. As Justin Rosenstein, the former Facebook engineer who created the “Like” button, put it: “Everyone is distracted, all of the time.”

Another much-shared article was The Atlantic’s “Have smartphones destroyed a generation?” by psychologist Jean M Twenge who studies generational differences. Her research finds unusually high levels of anxiety and depression among hyper-connected youths who go to bed with their phones next to them and wake up to check it before anything else. “The twin rise of the smartphone and social media has… profound effects on their lives,” writes Twengue, “making them seriously unhappy.”

To summarise, the first article discusses how social media sites such as Facebook, Instagram and Snapchat get users addicted to bits of social affirmation in the form of “likes”, “hearts” and other small mood-boosters. At the same time, the sites’ architects know that too much of a good thing can quickly become dull. So they’ve devised complex algorithms tailored to each user’s feeds such that the happy stuff alternate with stuff that makes them sad, relaxed, angry, wistful and so on. A lengthy scroll down one’s Facebook account can potentially take one through a gamut of emotions – similar to talking to a close friend or going to a party.

HOOKED ON A FEELING

Facebook has become so adept at guessing people’s moods that an internal company report leaked this year showed it could identify when a young person feels “insecure”, “worthless” and in need of a “confidence boost”. This information can potentially be exploited to manipulate what the person does next – such as clicking on an embedded ad.

Eleanor Ong, a clinical psychologist at The Cabin Singapore – part of a chain of addiction treatment providers across the world – has treated numerous people with online gaming and pornography addiction. She has yet to treat anyone for social media addiction, but understands its potential.

“If you enjoy the instant gratification from the ‘likes’ and comments, it can develop into a popularity contest – just how many ‘likes’ can you get for posting something compared to your peers? And if you benchmark yourself against the social influencers who attract a lot of attention and freebies, then you may feel pressured to drive up your numbers too.”

(RELATED: Should your smartphone really be allowed at the dinner table?)

Tech companies have engineered their sites to facilitate this craving for higher numbers. LinkedIn’s new design automatically inserts a panel of new profiles each time you accept an invitation to connect. Facebook frequently displays images of people you may know – all you have to do is click on the button “Add Friend”.

Author Nir Eyal details the range of techniques tech companies use in his bestselling book Hooked: How To Build Habit-Forming Products. He writes: “Instead of relying on expensive marketing, habit-forming companies link their services to the users’ daily routines and emotions. A habit is at work when users feel a tad bored and instantly open Twitter. They feel a pang of loneliness and before rational thought occurs, they are scrolling through their Facebook feeds.”

The right shade of Google blue keeps people clicking back to search engine. The pull-to-refresh mechanism on smartphones – which has been compared to the levers of jackpot machines – keeps us swiping downwards in anticipation of new information.

But research now finds that an addiction to these technologies has serious repercussions, says Twengue. Since 2012 when the proportion of Americans owning a smartphone surpassed 50 percent, the rates of depression and suicide among American teenagers have spiked sharply and stayed high. Twenge argues that while social media promises connections, it has also heightened the feelings of loneliness and exclusion among people who are keenly aware of being left out when their peers post pictures of themselves socialising.

According to a recent study published in the Journal of the Association for Consumer Research, a smartphone can tax its user’s cognition simply by being next to the user. Even when a person isn’t using it or thinking about it, even if it’s on silent mode, its mere presence can sap a person’s working memory, problem-solving skills and concentration. Detractors attribute the phenomenon of Brexit and Trump to short-term reasoning and impaired judgement fostered by the instant gratification culture of social media and the smartphone.

One detractor, Grace Yang, a 22-year-old postgraduate student, has been wary of the smartphone from the start: “I didn’t like the idea of every function of my life being served by one device. What happens when you lose that device? For a long time, I was using a simple Nokia – until my parents forced me to get a smartphone because they were tired of the bad reception when I was studying abroad.”

An unusual refusenik among people of her age, she has seen how the smartphone affects relationships and intimacy among her peers: “I watch couples on dates who are on their phones as much as they’re talking to each other. I see groups of friends with their heads down, looking at their phones. I think the smartphone has had an isolating effect on my generation. People are just not present even when they’re there.”

To effectively wean yourself off addictive technologies, it helps to prioritise off-screen human interactions and real-life experiences, says psychologist Ong. “You have to create meaning in your life outside of whichever world you’re addicted to. You need to form solid relationships with people so you don’t rely on ‘hearts’ and ‘likes’ to feel validated and appreciated,” she says.

And just as the smartphone is designed for distraction, there are also now dozens of apps to break the dependency cycle. They include Offtime, Dinner Mode, BreakFree, Onward and StepLock, all of which work in different ways to regulate the amount of time you spend on your phone.

Go on. Search for those apps on your smartphone. And click “Get.”