Street art in galleries: meet the unlikely champions of Singaporean and Colombian artists

Ravi Thakran and fiancee Holly Turner are connecting the two countries with their gallery, Artitude Galeria. 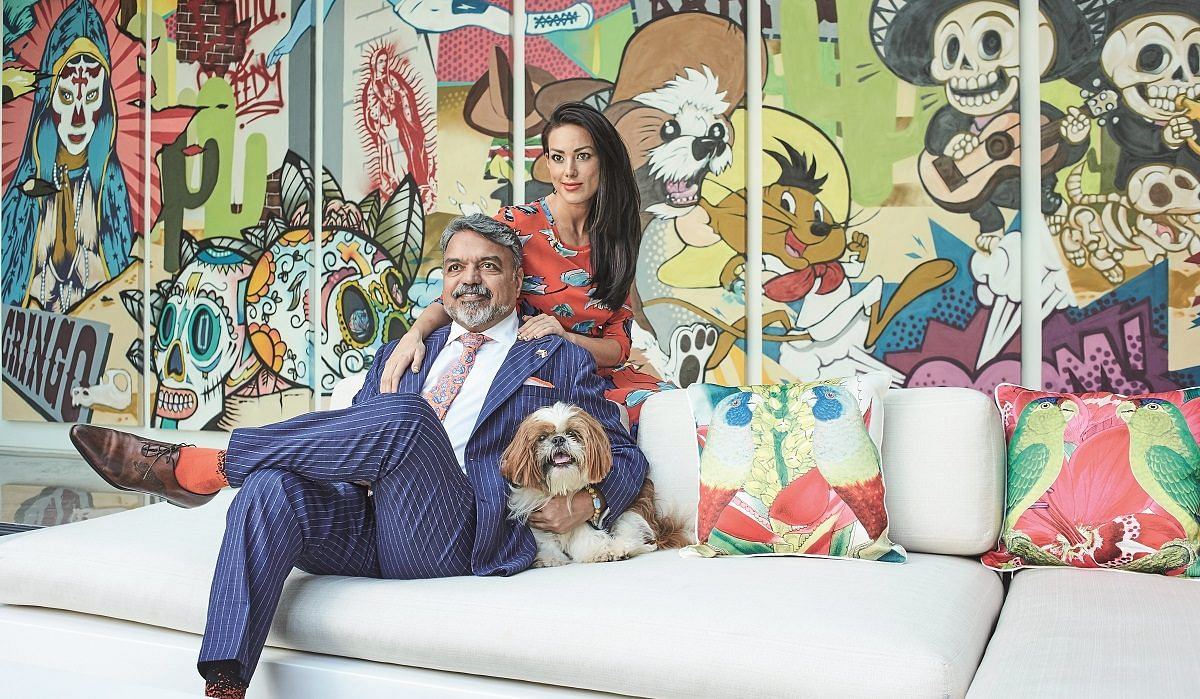 [dropcap size=small]P[/dropcap]icture a painting that depicts a luchador vaulting over a wall spray-painted with the image of Virgin Mary nestled in a bush made of sugar skulls as Speedy Gonzalez and a giant shih tzu race past a couple of sombrero-wearing, music-playing skeletons. Truly visual chaos, and truly street art. It’s bright, sometimes silly, often irreverent and always eye-catching.

Except that this piece wasn’t painted on a dusty wall in the back alley of a dicey Latin American neighbourhood. It was illustrated across seven canvas panels by Singapore street artist Zul Othman (who goes by Zero), and currently hangs in the plush mansion of Ravi Thakran and his fiancee Holly Turner. He is group chairman of LVMH South and South-east Asia, Australia and Middle East while she is a collector and former gallery curator with a long-time passion for Asian art.

(RELATED: Street artist Zul Othman: “I’m fine with legal walls but if I can’t say anything about sexuality, politics, religion or race on them, all that’s left to say about the art is that it’s beautiful.”)

So how did they become two of the biggest supporters of Colombian street art? “My work has taken us to Colombia a lot in the past few years and we just fell in love with the place. It’s so vibrant, so colourful,” says Thakran, who has been living in Singapore since 1994. “At the same time, we noticed that there wasn’t much Asian art there, so I thought we could help build a bridge between the two cultures.”

That’s where Turner comes in. After moving to Singapore in 2009, the Briton worked as an art consultant and curator at Redsea Gallery here. Then she realised that she wanted to start her own gallery and feature artists who weren’t represented here, and who worked in a unique genre. At the end of 2017, Turner set up Artitude Galeria to showcase Colombian and Latin American art through private viewings and exhibitions at The Fullerton Hotel.

The gallery now has a permanent home at 31B Pagoda Street, and to celebrate its recent launch, Turner and Thakran turned their home into an extension of the gallery, displaying select pieces from Magical Realism: A Colombian Art Movement exhibition.

FROM COLOMBIA TO SINGAPORE

Thakran and Turner aim to foster a cultural exchange between Singapore and Colombian artists.

Combining realistic depictions of the modern world with splashes of fantastical elements, it is a visual representation of the literary genre popularised by Colombian novelist and Nobel Prize winner Gabriel Garcia Marquez.

“The pieces are accessible, bright and bold, and people want that now,” says Turner, explaining her choice for the theme. “They want the paintings that fill their walls to scream
for attention. Everyone needs a little more magic in their life.”

Wanting to share that magic is the main reason the couple opened their home for private viewings. “Having worked in the art world, the most common complaint is that customers can’t visualise the art in their own home, so I thought a residential environment would be the perfect setting,” Turner adds.

(RELATED: 3 art collectors in Singapore have turned their homes into beautiful galleries)

But it wasn’t just a simple case of removing some furniture to make room for guests to walk around in and admire the art. “Galleries have white walls. Everything can be hung properly and you can easily create a flow. At home, we had to consider which artists would go well together, and make sure nothing felt disjointed,” shares Thakran.

Not that he minds, of course, because behind his luxury-conglomerate job title is the soul of an artist. “When I was younger, I had the option of taking a course in Sanskrit or commercial drawing and art. I took the latter and got into oil painting and pencil sketches. I even competed in youth festivals and university contests. Since that time, I haven’t made art in 25 years, but the interest doesn’t leave you.”

And it was actually through art that Thakran met Turner. “Redsea Gallery had an exhibition in 2011, and there was a black and white painting by a Vietnamese artist that I wanted. As it was on hold for another collector, I had to get in touch with Holly to express my interest in the piece in case the other buyer didn’t want it. That painting is now in our home.”

Bringing awareness to Colombian street art in Singapore is just the first step in their grand plan to connect the two countries. The next involves Zero. “I first saw his work at Neon Pigeon, where I was having dinner with a friend,” says Turner. “The moment I saw his mural of a pigeon wearing headphones, I knew I wanted to give Ravi a painting done by him, and I spent three months tracking him down.”

(RELATED: Fernando Botero on the universal appeal of his voluptuous figures and art’s role in affecting world affairs)

Given his audacious style, Turner admits she was surprised to learn Zero was a Singaporean artist. And it is precisely this sort of reaction Thakran wants to illicit from Colombians. “I want them to be amazed to learn that Singapore isn’t just famous for having the best airlines or for being the most efficient financial hub. I am proud to see quality art produced here,” he says. “I will be taking Zero and two of his fellow street artists to South America at the end of the year to introduce them to artists like Stinkfish, whom many consider to be the Colombian Banksy.”

But what of the people who feel street art doesn’t belong in a luxury home? “Of all the art we own, I’m proudest of Zero’s work. When President Barack Obama visited our home, he wanted to get a photograph by Zero’s mural. Well-done street art will always be a better talking piece than the work of someone already famous.”

Artitude Galeria and the couple’s home are currently open by appointment. For enquiries, e-mail holly@artitudegaleria. com or call 9837-1977.

(RELATED: Why street art and graffiti are actually selling well in galleries)