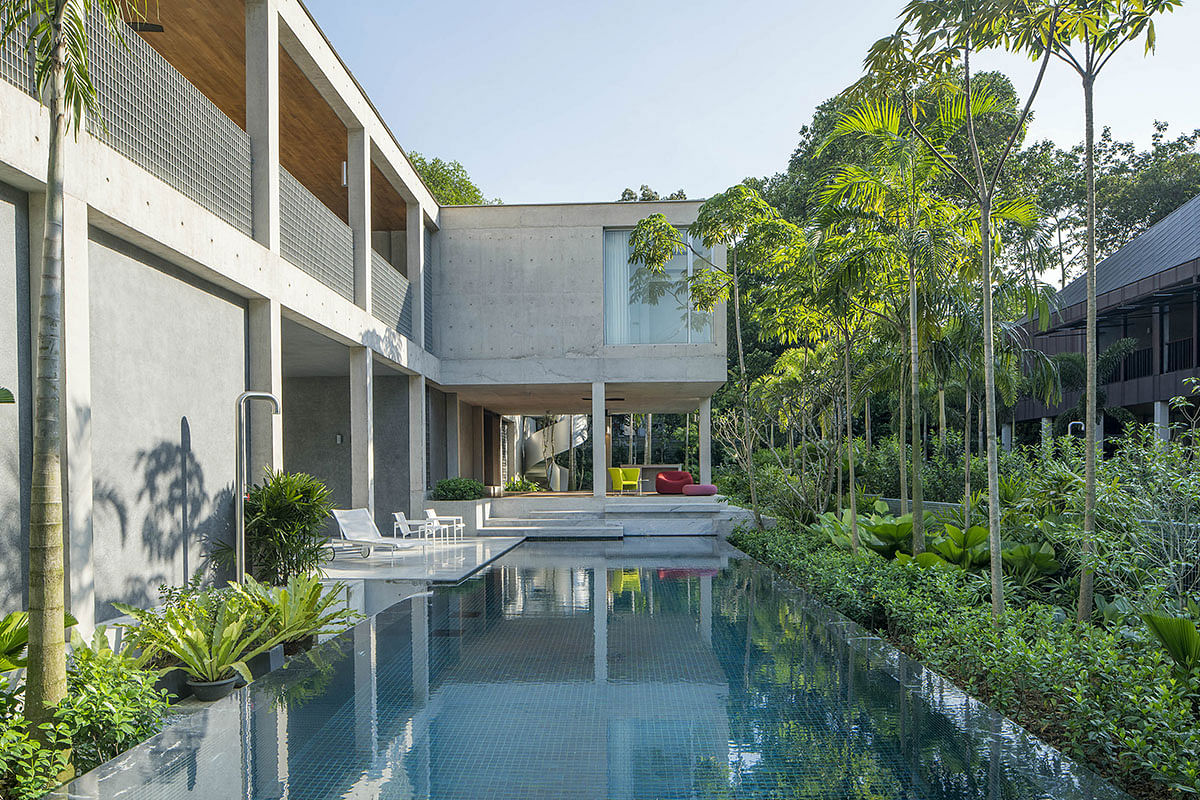 [dropcap size=small]I[/dropcap]t was not your usual house-rebuilding project – one where you have a piece of land, hire an architect and build your dream house. Firstly, there was 70,820 sq ft to build on. There was an old colonial building in one corner that was rented out until the tenants left in 2013, leaving a structure too small, too rundown and too insignificant to restore. When you have this much land in the gentrified green lung that is King Albert Park, the choice seems obvious – carve it up, build a few giant houses and sell them to the highest bidders. Done deal.

Except that this project fell into the hands of Grace Yang, who had no intention of doing anything of the sort.

Perhaps it helped that Yang, 32, had no real idea what she was getting into when her father – who owns a plastic manufacturing business – entrusted his middle child with the development of the land that had been in her family since her grandfather bought it in the 1960s.

At the time – four years ago – the engineering graduate was in between jobs and helping to manage some of the family’s properties which were rented out. She would eventually go full time into it as the general manager of K16 Services, which was set up in 2016 to manage commercial and industrial properties, and also the houses that now stand on the gently undulating land of 18, 18A, 19 and 23 King Albert Park.

But back in 2013, she was a wet-behind-the-ears fledgling property manager who had to convince Vista Realty – the property investment firm owned by the extended Yang family – to let her follow her own vision for the land. That included over-riding the decision to hire another architect for the job, and appoint the one of her choice, Yip Yuen Hong of ipli Architects.

Even though he was late to respond to them, Yang insisted he was the right choice because “Yuen Hong’s approach to things were fresh”. While it would have been easier to build four cookie cutter houses and put them up for lease, she wanted something more. She wanted a design that was close to nature, with large pitched roofs and generous verandahs; minimalist yet of high quality; individual sanctuaries without unnecessary embellishment or loud gestures.

All of which was right up the alley of Yip, 58, a four-time President’s Design Award winner and the personification of minimalist architecture.

While he was drawn to the King Albert Park Space – his largest private property project requiring him to design four very unique houses at the same time – he was a little wary about working with Yang, his youngest client. “I was afraid she might be a spoilt brat,” he admits. But she surprised him with “her thirst to learn, sieve through ideas and ask questions”. And while “she sometimes gets agitated, she has a sense of maturity – Grace is an old soul.”

In turn, Yang says, “Yuen Hong can be so stubborn sometimes. And he’s not easy to work with.” Midway through the project, she even had second thoughts about working with him, but is glad that working through their differences on design and how things should be done has been worth it. “You don’t want someone who just says ‘yes’ to everything.”

Exactly what they fought over they no longer remember, but Yip says, “It was always for the good of the project. I feel that if you don’t do something right the first time, it would be too much trouble to make changes later.”

The site’s undulating nature, while an attractive attribute, posed the biggest challenge for Yip, who had to figure out “how to connect the four houses when there are no fences in between”. He adds, “Manipulating the ground levels was difficult because of restrictions on how much we can shave the land. Another challenge was that we wanted the four houses to be like a village, hence the physical connection was important. We wanted them to be of the same architectural vocabulary but with each having its own character.

“What we didn’t want were houses that were all different and screaming for attention.”

On her part, Yang had her own heart-in-mouth moments when the project was threatened with construction delays and budget cuts mid-way, so they had to be more resourceful about sourcing for materials and creative in decorating the houses.

But in the end, Yang and Yip worked so well with each other that they’ve since gone on to work on refurbishing an industrial property and a black and white house together. And Yang is well on her way to make the switch to property construction. With her background in engineering, she studied for a diploma in construction management from the Building and Construction Authority. And with Yip’s encouragement, she also did her MBA.

If it feels like the duo went to a lot of trouble to design homes meant only for rental, Yip says it was because he didn’t want to do something “middle of the road”. But, “at the same time, there is no need for fancy architecture, as that will get boring very quickly.”

Yang too fully appreciates Yip’s understated style, even though “they were harder to rent out as these four are not the traditional, mass-market type of houses.”

She adds: “It was also more difficult because the houses do not reflect the traditional definition of luxury. For these homes, there is luxury more in space, and in the little details and raw materials than in everything looking new, shiny and expensive.” She declined to reveal construction costs for the houses.

For her, there was never the worry of not being able to rent them out. “We just needed to target a specific audience,” she says. At any rate, all four houses are already tenanted out.

It has been a long and arduous journey working on the King Albert Park houses, but rather than relief, Yang feels a strong sense of pride.

“People are pleasantly surprised when I take them for a viewing,” she says. “They like the execution and how the architect’s intent comes across clearly.”

It is also why she decided she had to work with Yip. “Some architects I spoke to previously, would eventually give in to the client, which would have diluted the design intent. But not with Yuen Hong, who would stick to his guns and only come up with an alternative when his design cannot be executed at all.”

Yang feels especially proud that the four houses do not look like the typical GCB. “The spaces are well thought out, and the homes all leave an impression. And they last. The last thing I want is to build houses that will be torn down after a few years,” she says.

Yang’s next project will be a retirement home for high-end clients. She could only reveal that it will not be in Singapore, and the idea is only in the concept stage. “I work on projects that are niche and in demand,” says Yang.

Yip, whose latest project is the condominium Martin Modern at Robertson Quay for GuocoLand, was inspired by Singapore’s black and white houses for the King Albert Park project.

“The black and white bungalows exude quiet elegance, and are the epitome of slow living,” Yip explains. He adds that verandahs are a key feature of such homes -“not only do they protect the house from rain and sun, but they are spaces for friends and family to gather.”

The four homes have common features, which include a sloping roof, effective for rainwater run off, like those of the black and white houses. The deep verandahs and terraces buffer the interiors from direct sunlight while providing comfortable and usable semi-outdoor spaces.

Specially selected shrubs and trees serve as gentle barriers between each house. At the same time, they come together seamlessly as one large garden. Each house comes with a generous-sized swimming pool.

Skylights bring light into the homes, with built-in trellises to control the amount of sun coming in. As for the cladding on each house – concrete, brass, copper and black aluminium – “the metals are all in dark colours to complement the surrounding greenery,” says Yip. “And concrete will look better with age.”

(RELATED: What does a Singapore architect’s home look like?)

The house at No. 23 resembles a fortress. As it is situated on the highest ground among the four houses, Yip designed the driveway to lead to the second storey, where the common areas are. The bedrooms are then on the lower floor. “Entertaining on the higher floor gives a panoramic view of the surroundings,” he says.

Inside, the light grey granite flooring for the common spaces and bathrooms complement the fair-faced concrete exterior, continuing the same purity and calmness throughout. Concrete breeze blocks, used as wall screens and skylights, provide an old world flavour while functioning as a screen for shade and privacy.

The 9521 sq ft house comes with five bedrooms with ensuite bathrooms, two kitchens and a family room. It is currently occupied and will be available for rent from May 2018.

No. 19, which is occupied till November, is a two-storey house with copper for its roof and second-storey shell. In time, the earthy red tone will take on a green patina, giving the house a rustic character. At 10,478 sq ft, it is the largest of the four.

What’s interesting about the home are its bedrooms. Yip designed the sleeping areas without any windows, but instead light comes through from the verandahs, which can be accessed via large sliding doors. The copper screen keeps rain and direct sun out, and some panels can even be lifted up to 90 degrees. “The position of the panels will change the shape of the house,” says Yip.

The master bathroom is a definite talking point, with multiple mirrored surfaces cloaking a shower cubicle, concealing the toilet and reflecting the occupants from multiple angles.

For No. 18, a concrete framework and pitched roof with black aluminium screens on the facade define this house. Light is filtered into the house through this screen, while the darkened exterior and white interior offer a modern interpretation of the black and white bungalow.

A sheltered, double-volume outdoor terrace is the focal point of this 8772 sq ft house. The sheltered terrace extends on one end to the living and dining area and to the bedrooms on the other side, meaning the entire house can be opened up almost fully under any weather conditions, hence allowing for natural ventilation all year round.

Being at the centre of the development, No. 18A looks out to the extensive landscaped foreground that ends with a row of mature tropical trees bordering the site.

For this 8362 sq ft house, Yip designed the main volumes of the interior spaces to be set back from the building outline, creating double-volume terraces.

A brass screen hangs over the second storey, and in the day, the house reflects a golden hue. At night, the screen provides privacy, revealing only silhouettes of the activity within.