Singapore’s first housing estate has gained a bright new future with the entry of hip cafes and eateries after being gazetted for conservation in 2003. 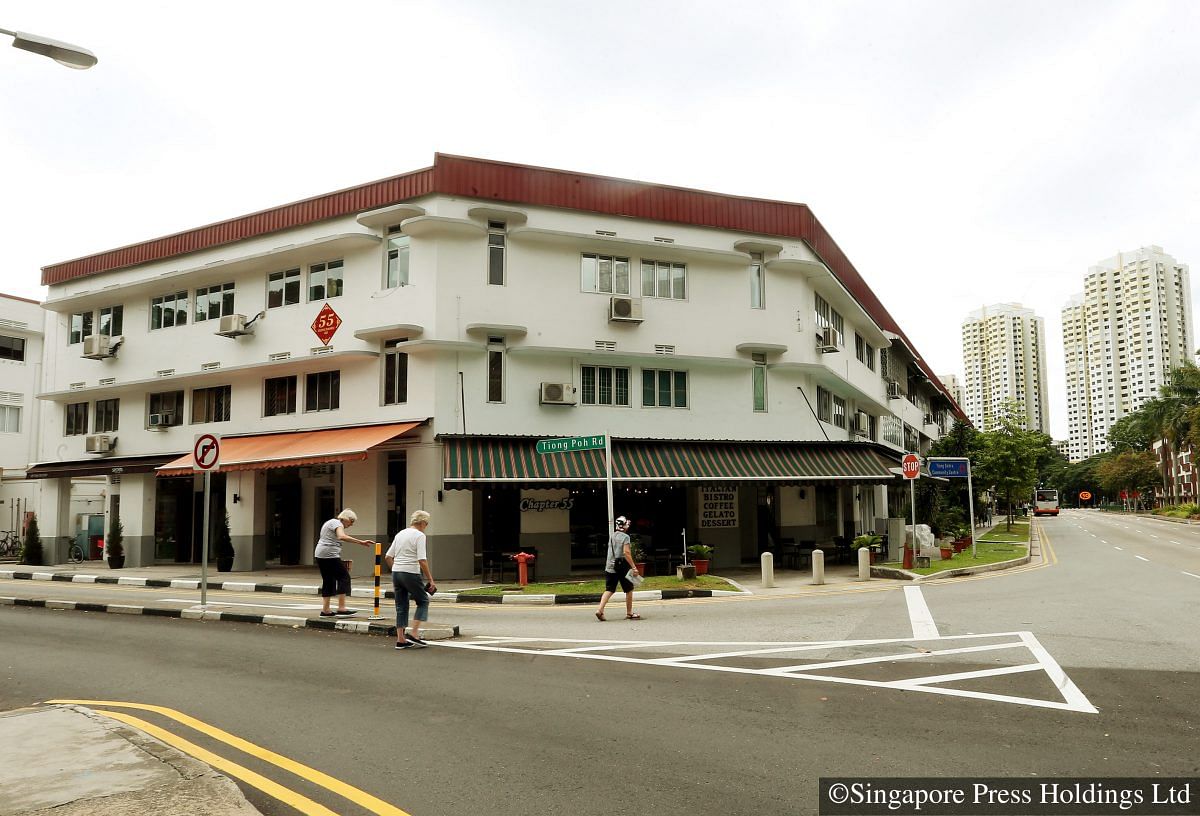 https://www.thepeakmagazine.com.sg/lifestyle/tiong-bahru-estates-rising-popularity/
Gallery Format 38068
image
image
image
[dropcap size=small]S[/dropcap]ingapore’s first public housing estate in Tiong Bahru is experiencing a second lease of life, after an exodus in the 1990s. The residential estate at Tiong Bahru, comprising 20 blocks, was built in the Art-Deco style, with geometric lines and motifs on the buildings’ facade. Block 55 is the first of the 20 blocks to be built in 1936.

The rentals charged by the Singapore Improvement Trust were considered high and beyond the reach of many. This led to affluent businessmen, who could afford the rentals, reportedly renting apartments in the estate for their mistresses. Prices for market produce were also comparatively higher than in other estates.

But by the 1980s and 1990s, the old flats there started to seem less lustrous compared with the newer Housing Board estates elsewhere on the island, with families moving out to these modern estates as well as to condominiums.

Older residents were left behind and foreign workers started moving in to occupy the empty apartments. This led to a sense of uncertainty among residents, says Professor Lily Kong, Provost and Lee Kong Chian Chair Professor of Social Sciences at Singapore Management University. Fear spread among residents that their maturing estate would get torn down, prompting further departures.

However, such fears were allayed in 2003 when the estate was gazetted for conservation by the Urban Redevelopment Authority (URA) — a move which kick-started a revitalisation of the area.

Hip cafes, bakeries and restaurants such as coffee house Forty Hands and Plain Vanilla Bakery swiftly set up shop in the estate, a stone’s throw away from older establishments such as Tiong Bahru Galicier Pastry and Sin Hoi Sun eatery, which has been there for more than 30 years.

Now, the area is popular with younger residents who frequent the new joints, as well as older residents who make the neighbourhood coffee shops, such as Hua Bee at 78 Moh Guan Terrace (yakitori restaurant Bincho takes over at night), their first port of call in the morning.
While Prof Kong notes that there is now a different feel to the place, one thing has remained: it still serves its purpose of encouraging human interaction.

The estate, which was completed in two phases before and after World War II, was built by the Singapore Improvement Trust and inspired by the urban planning and architecture of British public housing during the same era.

The blocks are low-rise — two to five storeys high — with pockets of green areas around the estate and five-foot-ways to encourage interaction among the residents. For this purpose, the ground-floor corner units are reserved for coffee shops, eateries and other amenities.

Prof Kong says: “The estate was built with the principle of facilitating social interaction — its structure of low-rise housing, small public spaces interspersed among the apartment blocks and open green pockets provides opportunities for people to run into one another.”

Tan Huey Jiun, director for conservation planning at URA, adds: “Tiong Bahru is dear to many Singaporeans. Its rich history, unique architecture and familiar streetscapes are an important part of our heritage.

“In total, 20 blocks of pre-war flats have been conserved so that Tiong Bahru can continue to evolve with the assurance that the identity and charm of the area will be kept.”

Different corner designs
The different corner of each building clearly distinguishes the blocks from one another and acts as a visual motif. The corner of Block 55 has concrete sunshades on its facade as a simple design feature.

Original window and door frame designs
These handmade wooden door frames and metal frames are 80 years old. This estate is the first in Singapore with such high quality frames by well-known British window company Crittall, says Tan Huey Jiun, director for conservation planning at the Urban Redevelopment Authority. The slim, elegant aesthetic of the steel is a change from the traditional wooden windows often used in that era. They have special features such as top panels which can be left open for ventilation in rainy weather.

Climate-friendly features
The flats have balconies, which act as a buffer from the heat, and concrete sunshades overhanging the steel windows with original green textured panes to cut out the glare — useful features designed in an era before the use of air-conditioning. The green windows help create a visual sense of coolness and provide privacy, says Tan. “The green glass is now a rare feature in Singapore and in the estate. Overseas, such glass is seen as antique glass and is very expensive.”

This story appeared in The Straits Times.