Why are millennials flocking to co-living spaces in Singapore?

New players are moving into the co-living sector in Singapore, as the alternative rental scene starts to take off. 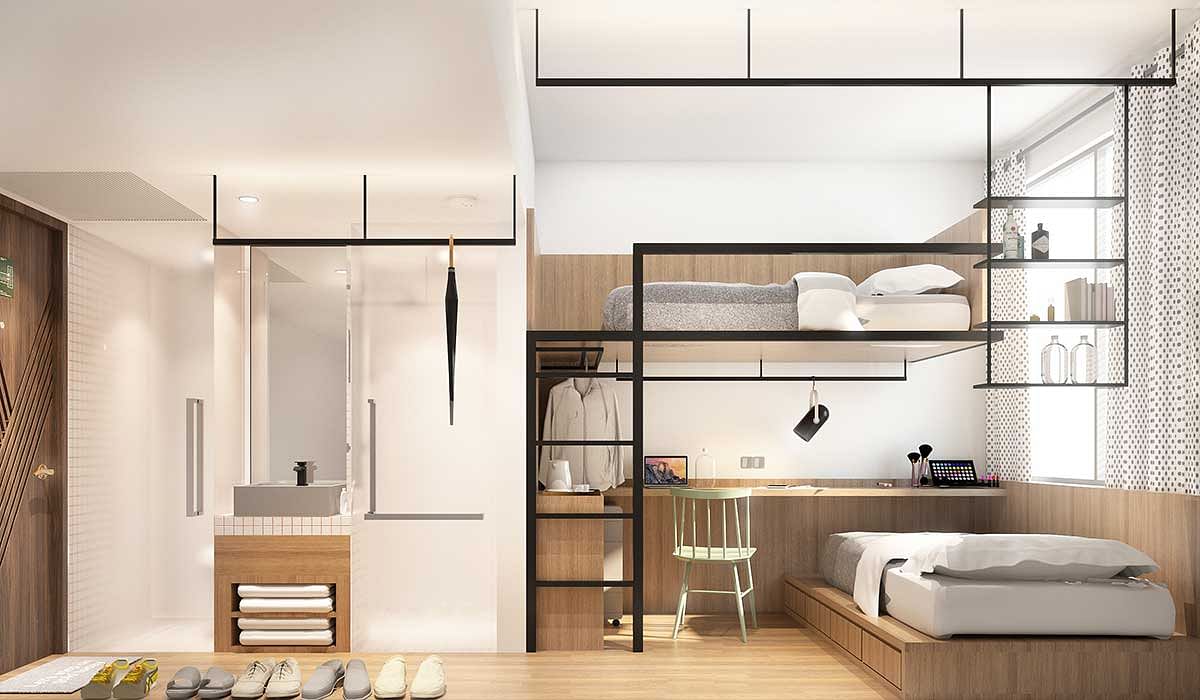 [dropcap size=small]T[/dropcap]here used to be a time when conventional wisdom warned against getting into a car with a stranger. But in an age where the likes of Grab and WeWork have transformed social norms, living with strangers is a concept that’s started to gain traction too. Of course, co-living isn’t new to Singapore, nor is it an entirely new proposition.

Co-living pitches community spirit as one of the major perks of the set-up, while pairing together like-minded folks as roommates. Operators typically throw in utilities, housekeeping and Wi-Fi, a community manager to sort out snafus and (in a manner of speaking) friends.

(RELATED: How the founders of Airbnb went from cash-strapped roommates to billionaires)

For those new to the city, a key draw to co-living might well be the social events that are organised regularly by the operator, or the opportunity to hang out with like-minded individuals in shared common spaces.

Early entrants such as 13 and Techsquat started the ball rolling in 2014 and 2015, but pulled the plug within a year as the concept failed to take off.

But since then, there’ve been new players in the co-living sector, some emboldened by flush investors. Established property players such as City Developments Ltd and The Ascott also have their eyes on the game and have started moving in. The relaxation of the minimum rental period for private homes from six months to three months in June last year is also seen as something of a boost.

(RELATED: 4 millennial entrepreneurs transforming the way we eat and live)

It also has units in locales such as the central business district, Little India and River Valley. Outside of Singapore, it has expanded into Hong Kong, while operations in Tokyo are still in the pilot stage, it says.

The company closed a US$1.5 million seed financing round in 2017, led by corporate venture capital fund Aurum Investments, which is a unit of construction firm Woh Hup Holdings. In November, it was announced that Hmlet raised a further US$6.5 million in Series A funding led by Sequoia India.

Hmlet co-founder Yoan Kamalski says: “Hmlet is more than just a place to live. We create a dynamic environment that empowers our members to be a part of something bigger and focus on their growth and their development. We are also a long-term solution for people and it’s been proven, considering the average stay of members with Hmlet is 13 months. We want our members to find their place in the world and make unforgettable memories alongside the people they meet.”

Hmlet’s portfolio covers over 100,000 sq ft of space, which it leases and sub-lets out to co-living tenants, and it aims to double this to over 500 rooms by H1 2019. Its occupancy rate stands at about 96 per cent, while monthly rates start at S$1,500 for master rooms with an ensuite bathroom.

Mr Kamalski adds: “We cater to the millennial market, who are more likely to rent than own homes. Millennials, we found, also have this desire of not being locked-in, which is why the flexibility of our month-to-month membership plans are so desired.” In line with government regulations, members first have to commit to a minimum of three months before they can opt for a month-to-month plan.

While he reckons there is enough room in the market to accommodate multiple co-living players, Mr Kamalski asserts that Hmlet’s distinguishing factor is the way it “(changes) the way people live. The energy and community you’ll experience is totally different.” He points out that members don’t have to worry about the nitty gritty such as weekly cleaning, furniture or paying utility bills, while events organised by Hmlet make it easy for members to mingle and build relationships.

Since launching in March this year, competitor Login Apartments now has about 50 bedrooms across different condominiums such as Alex Residences, The Springs and Commonwealth Towers, with occupancy hovering at over 80 per cent. Rents range from S$1,500-S$2,200 monthly for one bedroom.

Its units are concentrated in certain areas, such as Commonwealth and Novena, to reap efficiencies, such as to facilitate housekeeping services. Its guests are typically expatriates working at startups, entrepreneurs or students, and range in age from 19-40 years old.

While country head Calvin Cai doesn’t discount the Singaporean market – some millennials may want to get out of their parents’ home or may need a short-term lease while waiting for their BTO flat – Login’s marketing efforts are mostly aimed at non-Singaporeans.

As it scours for more space, it is approaching individual asset owners and high net worth individuals with multiple properties in Singapore, Mr Cai says. In the next three years, it intends to boost its size to 300 units, or about 900 rooms, as it eyes co-living buildings to foster growth.

The plan, says Mr Cai, is to eventually roll out Mamahome on Login’s platform once it has reached critical scale.

“To hit critical scale in Singapore would be around 300 to 400 units,” he believes. But Singapore – which serves as a test-bed for the region – isn’t the only market that it is eyeing. It plans to enter cities in emerging markets, such as Ho Chi Minh and Bangkok, by early 2020.

Then there’s CP Residences, which was incorporated slightly over a year ago and manages some 30 units at Centrepoint Apartments in Orchard Road, some of which are owned by founder and former banker Wendy Yap. The remaining units are leased from individual strata owners. While fully owned by Ms Yap, CP Residences has also attracted investments from local and foreigner investors. Presently, its occupancy rate sits at about 70 per cent, while rates range from S$1,500 per month for a room to S$4,000 and upwards for an entire apartment.

“We see growing pockets of demand – global travellers and corporates who are looking for a flexible lease instead of being tied to a normal lease,” says Ms Yap, adding that a part of the target demographic is single millennials.

The mix and match

Like the other co-living spaces, guests from similar or complementary industries are typically matched together to ensure they have some common ground or even to create opportunities for business. CP Residences also organises networking events, such as sporting activities or food tours, and has started branching out into the co-working space with 10 desks at Cuppage Plaza. The latter go for S$5 an hour or S$15 per day, but are free for its tenants.

“We want to be seen as a more premium player, rather than a mass-market player,” she says, adding that 20 of its units would be undergoing major renovations. “We have a very unique location along Orchard Road.”

Growth in the region will likely be fuelled by strategic alliances with partners, she says. “We want to try to promote this culture,” adds Ms Yap. “We are not just targeting people in Singapore, but from around the region.”

Meanwhile, CapitaLand’s serviced residence arm, The Ascott, is poised to launch its first co-living property next year. Dubbed lyf, the brand is “designed and managed by millennials for millennials and the millennial-minded”, and enhances Ascott’s portfolio of existing brands. The hospitality group is targeting 10,000 units under lyf globally by 2020.

(RELATED: How established brands The Ascott and Martell appeal to millennials)

To date, Ascott has lined up six properties in China, Singapore, Thailand and the Philippines that will bear the lyf brand, starting with the 112-unit lyf Wutong Island Shenzhen, which is slated to open in the first quarter of next year, followed by lyf Funan Singapore that same year.

In 2021, it will launch lyf Farrer Park Singapore and lyf one-north Singapore; the greenfield site at one-north was recently acquired by Ascott Residence Trust for S$62.4 million. Its lyf property in Bangkok will open its doors in 2020, and lyf Cebu City in the Philippines in 2021.

In the meantime, it tied up last year with the Singapore Management University, establishing a living lab to test out co-living concepts which could be rolled out at lyf properties.

Ascott is aiming to deliver a “fully digital experience” by going paperless and cashless, while a mobile app will facilitate check-ins, bookings and social activities.

According to JLL Singapore’s estimates, the supply of co-living space in Singapore – including supply under construction – is presently less than one per cent of Singapore’s total existing private housing stock of 366,826 units, as of Q3 2018.

With over 1.6 million foreigners in Singapore – not including permanent residents – there is scope for growth in the co-living segment, highlights Tay Huey Ying, head of research and consultancy at JLL Singapore. The segment could span different concepts, from lower-cost shared housing to a living product for professionals as well as those aimed at the growing single-person households across a broader age spectrum.

Ms Tay says: “Although slower to take-off than the co-working sector, the co-living market saw unprecedented activity over the past two years. Even the government recognises its benefits and has awarded a site in one-north through JTC for the development of a co-living facility.”

“The co-living sector’s later take-off in Singapore could be attributed to the availability of alternatives such as the private leasing market and serviced residences,” she adds.

“However, co-living operators’ ability to plug inefficiencies in these alternatives – such as by suitably matching individuals on factors such as like-mindedness, location or budget – have led to the recent pick-up in the sector.”

One of the key challenges faced by the co-living segment is the “deeply entrenched home-ownership culture among Singaporeans”, which together with the ability to acquire property by leveraging their Central Provident Fund’s ordinary account, has contributed to the preference among Singaporeans to buy rather than rent, she notes. As a result, demand for co-living tends to mostly come from expatriates.

On their part, co-living players here remain confident that the market potential for the segment could be big.

Education, Mr Cai reckons, is important. When co-working first started out, a lot of people didn’t believe in it or understand it, he highlights. “Given we have a strong foreign labour market in Singapore, this will be a sustainable model here.”

(RELATED: New co-working space in Singapore is changing the way people feel about going to work)

Hmlet’s Mr Kamalski argues that comparing the two is like comparing apples and oranges. Nonetheless, he reckons that co-living will be a “bigger opportunity” than co-working.

He says: “Where you work and where you live are two totally separate environments. With co-living, it’s a lot more sensitive and we work hard to make sure we cater to the basics, while also providing the right environment where our members can be the best version of themselves. It is cliché, but you build your life starting with where you live.”

(RELATED: What’s special about these 4 new co-working spaces in Singapore?)