The museum will be showcasing Leonardo da Vinci’s Salvator Mundi, the world’s most expensive painting sold, in its collection later this year. 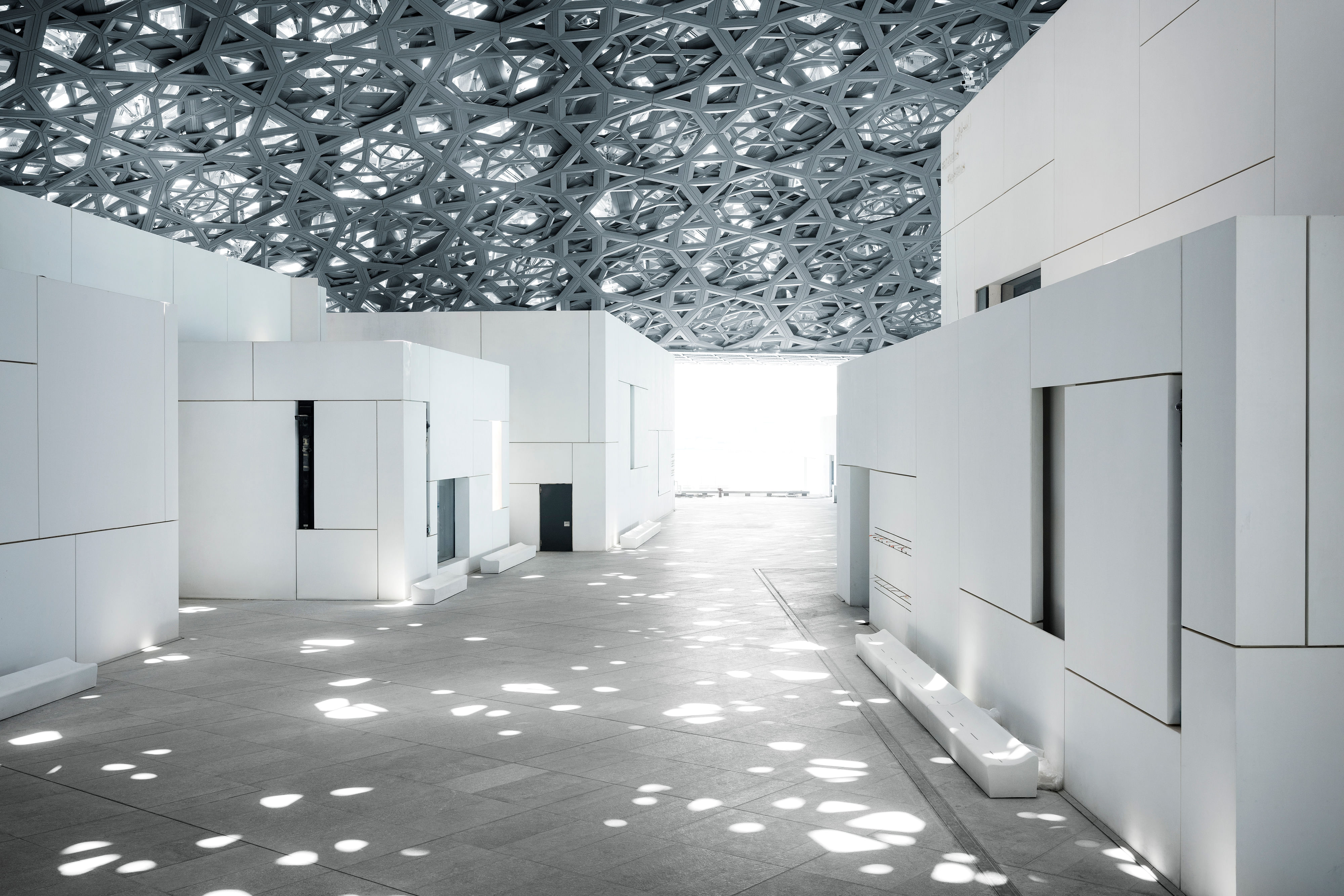 [dropcap size=small]I[/dropcap]t wasn’t quite a deed of biblical proportions, but the building of the new Louvre Abu Dhabi museum on an upscale 27-square km island at the south-eastern tip of the Arabian Peninsula involved, among other things, a parting of the sea and the creation of a “constellation” of stars. Crowned by a futuristic dome that appears to rise from the sea, the museum – a decade in the making – opened in November last year to massive fanfare and the sort of universal expectations normally reserved for a new Avengers movie.

For the most part, it has lived up to those expectations. In a region where rows of steel-and-glass skyscrapers shimmer like giant jewels in the desert sun, the Louvre Abu Dhabi is both an exercise in relative restraint and a classy entry in the Gulf’s ongoing can-you-top-this stakes that – if all goes as planned – is merely the opening salvo of a blockbuster plan to develop a cultural district on Saadiyat Island (or Island of Happiness), minutes from downtown Abu Dhabi, aimed at transforming the Emirate from a purely oil-based economy to one where cultural tourism and so-called “soft power” play an increasingly prominent role.

In this part of the world, a billion dollars isn’t what it used to be. That’s why it took close to US$2 billion to turn the Abu Dhabi Department of Culture and Tourism’s (DCT) dream into reality. An agreement (worth about US$1.2 billion) between the United Arab Emirates (UAE) and France signed in 2007 allows for the lease of the Louvre name (until 2037), plus the loan (for 10 years) of about 300 works from the Paris museum and some 15 other French cultural institutions such as the Pompidou Centre and the Musée d’Orsay. An additional US$650 million was spent on actual construction of the museum.

The arrangement allows Louvre Abu Dhabi time to build up its own collection, a task that its curatorial team has taken to with some enthusiasm and a bigger-is-better mantra. The mega-acquisition that had the art world gasping in astonishment was Leonardo da Vinci’s Salvator Mundi (“Saviour of the World”, circa 1500), purchased at auction for US$450 million on Nov 15 last year, four days after the museum’s opening, earning it the title of the most expensive painting ever sold. Other significant works in the museum’s collection include a Mondrian painting, bought at auction for US$28 million from the collection of Yves St Laurent and Pierre Bergé, and Madonna and Child by Renaissance artist Giovanni Bellini.

Even before the original Louvre signed up, the heavyweight architect and museum specialist Jean Nouvel was appointed to design the museum, which is the first piece of a cultural district cluster that is slated to include a National Museum (designed by Foster & Associates) and a Frank Gehry vision of Guggenheim Abu Dhabi.
That was the plan, but with oil prices in the doldrums and political uncertainty in the region, the government tightened its purse strings and the latter two museums are currently in a holding pattern, leaving Louvre Abu Dhabi and the existing Manarat Al Saadiyat cultural centre to fly the flag by themselves for the time being. Other planned projects, including a Zaha Hadid-designed performing arts centre and a maritime museum by Tadao Ando, may not be built at all.

Mr Nouvel’s design called for an eight-layered steel and aluminium mesh dome, 180 m in diameter, to “hover” above a collection of over 50 galleries and courtyards while allowing sunlight to filter through and create a “rain of light” on the surfaces below – a high-tech reinterpretation of the traditional Arabic pierced screen. At night, the dome exterior sparkles like a starlit sky. Water channels link the the sea with the 87,000 square-metre site, with shimmering pools of shallow water lapping at the edges of the promenades. Seawater was diverted during the construction process, then re-diverted to flow back in after completion.

The exhibition space is spread over various galleries displaying about 600 objects, and the Louvre Abu Dhabi’s curatorial team has already acquired several hundred works covering multiple eras and cultures. The museum’s inaugural display traces an intercultural timeline, showcasing art from different cultures grouped in themed galleries and sometimes within the same display case. Several galleries highlight the similarities between seemingly disparate cultures. For example, a Yemeni Torah is displayed alongside a 7th-century Quran and a gothic Bible. The result is a sort of cultural highlights guide to the history of mankind as well as a who’s who of art through the ages.

From a two-headed sculpture dating to the Neolithic Period (circa 6,500 BCE), discovered in Jordan, and a chipped-but-still-beautiful bust of Alexander the Great (about 100 BCE) to top-quality Impressionist works by the likes of Monet, Manet and Van Gogh, modern masterpieces by Pollock and Modigliani and contemporary contributions by Ai Weiwei and Giuseppe Penone, the vast majority of the items on show are beyond sensational. And the Salvator Mundi isn’t even scheduled to be displayed until later in the year.

“Louvre Abu Dhabi is a 21st-century museum, especially created for Abu Dhabi,” says Louvre Abu Dhabi director Manuel Rabaté in an email interview. “Artworks from around the world and throughout history are displayed side by side, highlighting shared ideas, aesthetics and techniques that travelled across the globe as many cultures came into contact.”

He adds: “It provides a transformative new experience for visitors – it is the Emirate’s flagship project and has become an unmissable stop on any visit to the UAE. We are already seeing the great impact it’s having on tourism in the city, as well as on Abu Dhabi’s reputation for world-class culture and arts.”

According to Mr Rabaté, about 4.9 million people (slightly more than double the population) visited the Emirate in 2017, an increase of about 10 per cent over the previous year. He adds: “We’ve been overwhelmed by the positive response to the museum from industry peers, international tourists and residents alike, with between 2,000 and 5,000 visitors most days and up to 10,000 on our busiest days.”

“It’s a significant number for any museum,” says Salwa Mikdadi, associate professor in art history at the Abu Dhabi campus of New York University. “Now that the museum is on the ground, as real as can be, the very ambitious plan to develop the Saadiyat Island cultural district seems possible.”

The proposed Guggenheim Museum project is far bigger than the Louvre project but it has been hampered by delays and may be reduced, notes Ms Mikdadi, adding that the district’s art and culture offerings have been conveniently compartmentalised. “The Louvre is universal, the National Museum is about local heritage, the Guggenheim is focused on modern and contemporary art,” she points out.

“The UAE is a young country, it’s building fast, trying to be an observer of historical, cultural and political events in the region,” says Ms Mikdadi, formerly head of the arts and culture programme at the Emirates Foundation and also the professional practice programme at the Department of Culture and Tourism (DCT). “When I was at the DCT, we worked on having a year-long cultural programme to sustain tourism, having different events throughout the year – we’re moving from a fossil-fuel economy to a tourism-driven one.” She adds: “I think Louvre Abu Dhabi is fast becoming a star tourist attraction, thanks to the Louvre name and also the selection of artworks.”

Mr Rabaté, the Louvre Abu Dhabi director, agrees. “The museum is an architectural masterpiece and has become instantly iconic,” he says. “Our building is a work of art in its own right. Jean Novel’s breathtaking design took inspiration from traditional Arab architecture – like the medina, old souks and palm trees in the desert oasis – and combined it with cutting-edge energy-efficient engineering.”

The magnificent Sheikh Zayed Grand Mosque remains the No 1 attraction in the Emirate but Louvre Abu Dhabi has, within months of opening, consolidated its hold on second spot and will continue to pull in (mostly) satisfied customers. There has been some criticism that the items on display are too Eurocentric and provide a limited world view but given the overwhelmingly positive initial response and the near-instant cultural credibility achieved by the Emirate, it’s no exaggeration to call the exercise – expensive though it may have been – a resounding success.

A few parallels might also be drawn with developing the cultural scene in Singapore, which in recent years fed its own instant-arts-hub aspirations by building museums, creating annual art fairs and providing incentives for foreign art galleries to set up shop here. “There was a time they wanted to call the UAE the ‘Singapore of the Gulf’,” says Ms Mikdadi. “It’s the kind of economy we have. The government sees this as the only response to the world we live in – with digital technology the way it is, you’re out of the loop if you don’t work fast.”

She adds: “I am not sure how great this is for art history – I am from an older generation that witnessed a period when there was absolutely no interest in art. More people are coming here because of the Louvre, which is a wonderful resource for our students. It’s a treasure trove, to have a permanent exhibition that we can study, to have exquisite art that we can touch. I teach a course called ‘Museums, Art & Society’ and the Louvre is our laboratory – even if it doesn’t have the ‘right’ artworks, it doesn’t matter.”

On its part, Louvre Abu Dhabi will build up its permanent collection, rely less on loans, respond to constructive criticism and continue to tweak its offerings. “We aspire to be a place of experimentation, debate and cross-cultural dialogue through incredible programming and exhibitions,” says Mr Rabaté. “Our ambition is to become the region’s primary hub for scientific research and cultural conservation. At the same time, we’re developing future generations of museum professionals and opening up career opportunities in the creative sector, through training and development programmes.”

While Louvre Abu Dhabi has some way to go before it catches up to its Paris namesake (which attracted 8.1 million visitors last year, making it by far the world’s most popular museum), its mission – to be a beacon for the region’s cultural scene – is a more than worthy one. “Importing culture is not the correct term,” says Ms Mikdadi. “This is all about exchange.”

The writer was a guest of Etihad Airways, which flies daily between Singapore and Abu Dhabi. Visit louvreabudhabi.ae for information on museum programmes and exhibitions.